One of my stated goals in Shadowlands was to level up a Warlock alt and do some PvP. In retrospect, I’m not entirely sure WHY I had thought that was a good idea. Perhaps memories of ages past in which Warlocks were Battleground gods. That is, unfortunately, no longer the case.

Or maybe it still is, and I just suck.

Once I hit level 55 I was terribly tempted to use the Threads of Fate feature and otherwise abandon a rehash of the same storyline I had just completed a few weeks ago. What was stopping me was just the idea that perhaps slogging through the story again was going to be the fastest way to level, and thus using Threads would be a mistake. While waffling, I realized that there was the 50% bonus Honor buff active for only the next few days (at the time), so why not just head into BGs and see how it goes.

At the time of this writing, I have gone through roughly 50 BGs on the Warlock and hit the level cap, the majority of that being Affliction. And what I have come to realize is how many other classes/specs seem tailor-made to counter all of my shit. Kicks, stuns, magic immunity. Rogues are BG gods again, because of course they are, but it’s not just them. Monks have Diffuse Magic to send all my DoTs back to me, Touch of Karma for basically a 10 second immunity which also, hey, sends my damage back to me, mobility out the ass to counter my portal shenanigans, along with the usual stuns and interrupts. DKs are hard counters, but I guess that is what they are designed to be, so whatever. Retribution is Retribution. Warrior is Warrior.

So, yeah. The general sense I get is that if any melee actually gets in melee range, I am just stuck refreshing Agony and Corruption until I die. Even if I juke an interrupt and have already survived their stun and am not facing what appears to be a direct Warlock counter, the damage I deal is mostly garbage within the timeframe of my remaining health.

Compare Affliction to Destruction, for example. If I’m able to turret from the bushes, I can pretty much delete people with Chaos Bolt – that has a much more immediate impact to the current fight than everyone being at 50% HP thirty seconds from now. Getting trained by melee is still a bad time, but I’m a little less concerned about eating a kick when I actually have more than one spell school. Also, you can use Infernal as another emergency CC to try and get space for when Mortal Coil is on cooldown.

Why not just play BGs as Destruction then? Well… why not just play Mage instead? Or Boomkin, for that matter? There is something very satisfying about absurdly slow-moving Chaos Bolts hitting for 4700+ but I have all the same issues with melee as Affliction.

What I keep coming back to with both specs is this: what is the Warlock niche? What do Warlocks counter? With the ascendance of Shadow Priests, it’s not as though Warlocks are “the DoT class.” Destruction hits hard, but so do any freecasting caster. It’s not as though Warlocks possess an abundance of CC, especially when Fear takes 1.6 seconds to cast at a short range (well, shorter than normal spell range) and a single interrupt locks you out of everything for 3+ seconds.

Way back in the day, I remember Warlocks basically having all the same issues but they were at least extremely difficult to kill. Am I remembering wrong? Has it just been a general ability creep over the years that made melee so potent a counter? Or perhaps I am just doing everything wrong.

All I know is that I’m not having the best time as Warlock. I will stick with it a bit longer, focusing on Destruction. Having Covenant abilities might improve the experience, along with the Affliction legendary that basically makes Corruption a 50% snare for 24 seconds. Perhaps that will cause enough annoyance/disruption to the other team to make my presence on the field worth the pain.

Warlocks as the MoP Baseline

If you look at nothing else regarding the Mists of Pandaria Talent Calculator, browse the warlock section. Having looked at all the classes, it is pretty clear which among them have received the most designer attention. Which is not to suggest this pre-alpha build indicates which classes will be screwed or whatever. I’m simply saying that if the warlock design can be considered a baseline, Blizzard has a very real chance at blowing everyone’s fucking minds. 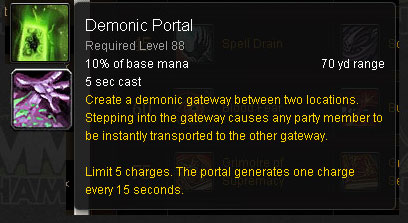 *cue the sound of one jaw dropping*

The sheer number of potential shenanigans boggles the mind. Set this up in a WSG flag room. Set this up in an AV tower. Set this up for your raid team as a handicap accessible ramp for those that struggle moving out of the fire fast enough. Set this up between the goddamn mailbox and AH. Five charges is not a lot, but I bet there will be a Glyph for more.

I don’t want to call a spell like this a “game-changer,” but I am finding it difficult to express what it does in any other terms. So many “new” spells and abilities in WoW are iterations of what came before. Malefic Grasp is the Affliction filler and acts as equal parts Drain Life and Shadow Bolt, with a speeding up of DoT damage innovation. Refreshing, and feels like something Affliction should do. Demonic Portal though is so out of the box that it feels like I have to approach the game in a fundamentally different way, even though it technically is an iteration too (“What if everyone could use a warlock’s Demonic Circle?”).

The rest of the warlock spells/talents show a similar level of left-field thinking. Look at the T3 talent line-up:

I think Spell Drain is going to be redesigned completely by the time Blizzard is through – no way it lasts with a 15 second cooldown – but all three of those are really, really hard choices. Yeah, raiders will probably stick with Soul Link unless the boss has an uber-move you can cheese with Sacrificial Pact, but I’m looking at this from more of a PvP standpoint. Or, hell, what about leveling/soloing old instances/running heroics/etc? Tough choices.

When I read this tier, I forgot these talents were from WoW; it felt like I was reading off some Dragon Age: Origin interpretation of a warlock. In a good way. These choices are more… warlock-y than warlocks have been in WoW since their inception. Before this, there was what? DoTs and Life Tap? Outside of the class quest to unlock the Succubus, I felt there was always a bit of weird, thin line between mages and warlocks. DoTs + pets vs nukes, sure, but once DoTs are up the warlock simply nukes too. And there never seemed to be much conceptual distance between Destruction warlocks and Fire mages. Now, with this kind of flavor and direction? Much, much better.

Everything can change between now and the Beta, let alone between the Beta and release (and the hotfixes, and mid-expansion overhauls, etc). But if the remaining classes can siphon off even a fraction of the creative juices oozing from these pre-alpha warlocks, MoP could end up making WoW feel like an entirely new, high fidelity experience to even the most bitter of veterans. I am indeed that impressed.