I am not going to talk about gaming today.

The Steam Summer Sale is in full swing, but all I am doing is buying games I am not going to play until months later. I mean, seriously, when am I going to play five Prince of Persia games? For $12.24, the answer is: probably someday at that price. The current routine is one farming circuit in Diablo 3, followed by probably ~2 hours of Battlefield 3, and capped off with a game I am actually trying to finish (Greed Inc). When I finish the latter, I will slot a new one in. Or maybe I will finally tire of one of the first two, and suddenly have 20+ free hours a week to rip through my growing collection.

By the way, it occurred to me that I have inexplicably not reviewed Fallout: New Vegas or Skyrim yet. Although I have plenty of material for both, I hate reviewing things months after I stopped playing them. Ergo, those are back on the table too. Eventually.

Anyway, what I really want to talk about is manga.

Cue exit stage left, if that is not your thing. Although if this isn’t your thing: 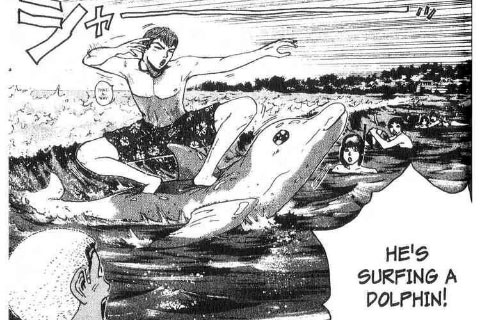 …then we can’t be friends anymore.

When I went on the beach vacation earlier this summer, I wanted to some light reading material. Not having a tablet or e-reader, I wondered if my iPod Touch would be enough to read something. Books? Kind of a pain. Manga? Surprisingly well. Rather than go through the hassle of uploading them as pictures and dealing with weird resolutions, I looked around for an app that did that. I found one: Manga Storm.

Like many apps, you can try it for free with an ad bar down at the bottom of the menu screen, or “unlock” it for $3.99 (which I recommend). It basically can search through five separate manga depositories – MangaFox, MangaReader.net, MangaEden, Batoto, and MangaHere – and pull anything in those catalogs for free. You can even download all the chapters, so you can read them later sans WiFi.

The really popular stuff like One Piece and Naruto cannot be accessed for some reason, but a ton of other quality manga can. My recent history includes:

By the way, if you never heard of YKK, I recommend it. It follows the deeply serene adventures of an android in the most relaxing post-apocalyptic setting I have ever seen. There is no violence or real drama, but it was pretty effective at evoking feelings of future-nostalgia. One of my favorite sections was this one:

I bring all this up for several reasons, but the biggest is as a means of soliciting manga recommendations. Do you guys have any? As my history list earlier hopefully demonstrates, I am fairly open-minded when it comes to the medium. All I am looking for is at least two of the following:

Manga like Sekirei skews towards the ecchi side of things, but I have zero problems with that. The end-goal is filling in those empty minutes while waiting for a BF3 map to load or for me to get tired enough to actually sleep. Ordinary, or extraordinary; slice-of-life, or epic magnum opus; new, or old; juvenile high school comedy, or Grave of the Fireflies. I want them all, if they meet 2 of the 3 criteria. Or maybe even just one… I’m running out of Angry Birds: Rio levels and I’ll be damned if I go back to Tiny Tower.

P.S. Feel free to send an email (check the About page for the address) with your recommendations if you fear a comment will harm your gaming geek cred.