Finally Burned by the Bundle

The Steam Summer sale came to a close a few days ago.

The end actually snuck up on me. I talked about the items on my wishlist before, but what ended up happening is A) I bought State of Decay 2 at full MSRP, B) I bought The Division (Gold) for $18, and C) I bought Conan: Exiles for $18 via two discounts on GMG. There still seemed to be relatively good deals available, but I wanted to spend all my time playing State of Decay 2 recently, and figured that that was worthwhile. Why buy more games than you can immediately play?

That would have been good and all, but… well… 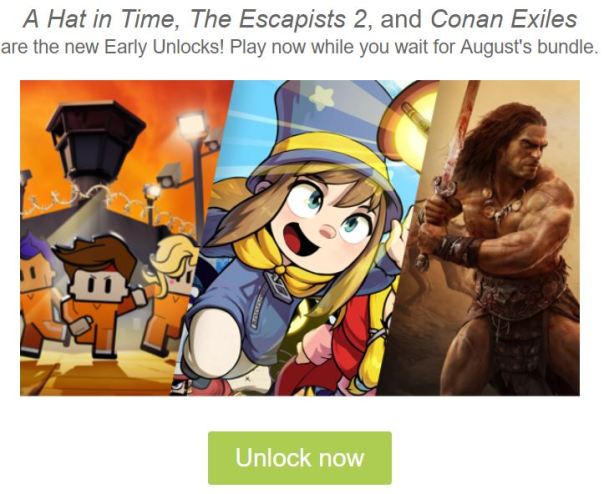 Yep, that’s Conan: Exiles as one of the early unlocks for Humble Monthly Bundle.

What’s worse is that I’m pretty done with State of Decay 2, and I’m having very little fun with The Division. I’m level 8 at the moment, and wondering if the rest of the game is going to be basically this the whole time. And so I may have been inclined to boot up Conan next, and yet I could have gotten it for $5 cheaper + a bunch of other games had I waited like two days – GMG doesn’t allow refunds once the code is activated. I could always pause for the month, but the cosmic odds are such that the hidden games are probably going to be more stuff I want. Until it’s actually purchased, of course, and what’s inside is really a dead cat. Quantum physics is truly the biggest troll of them all.

Actually, Steam sales are kind of irrelevant these days, as most digital retailers either match or beat even the best discounts most of the time. For example, Steam currently has a bundle up for Prey + Dishonored 2 for $28.33. If you pick up Prey for $15 on Steam individually, then you can buy Dishonored 2 for $13 on DLGamer and save yourself… thirty-three cents.

An actual example would be something like Conan: Exiles. It’s $24 on Steam and several other retailers, like Amazon. Well, I have one of those Amazon credit cards which gives you 5% cash back on purchases. So, we’re back to the big bucks in saving… $1.20.

Hmm. Perhaps we are indeed way past the commodification stage of gaming.

On a somewhat related topic, you might have seen people talking about the new Steam tool which allows you to check your total money spent on the platform from the beginning. Some people have posted their numbers rather guiltily, or celebrating their “low” scores. My own personal spending was around $2100, but I was curious as to how long a time-span that covered.

So, I scrolled and scrolled till I reached bedrock:

That takes me back.

Across eleven years, that comes out to about $16/month in entertainment. Humble Bundles and the like are not counted, of course, but I still feel more thrifty than guilty. During my Magic: Online days, I would routinely drop $10 to enter a Draft tournament that could be over within 30 minutes, to say nothing about what I spent on paper cards over the years. And, of course, most of us have years-long histories of MMO subscriptions behind us instead of, or in addition to, these numbers.

Still, I get the guilt. I have a wishlist of games I’m tracking across various storefronts, despite the fact that my library is filled with unplayed titles. Part of it is “collect them all,” but a larger part is avoiding “I feel like playing X right now, but the game isn’t on sale anymore.” For example, I’m currently on a survival kick and have an insane urge to play State of Decay 2. It’s not on sale though, so I’m looking at all the other games I have and playing those in the (vain) hope that it will scratch the itch. But it doesn’t. Close, but not quite. But I feel rather lucky I already have The Forest, and Subnautica, and a handful of other titles to tide me over until either the target game goes on sale, or the craving subsides.

Anyway, this is the current list of games on my radar:

Of those, I’m heavily leaning towards picking up Prey & Dishonored 2. And Final Fantasy 15. And Conan: Exiles. Because reasons. Well, mainly because Subnautica and The Forest aren’t cutting it anymore and I don’t have the hard drive space for ARK and I need to purchase all the things all the time and hoard digital games like pieces of wood to craft a shack in a post-apocalyptic world.

/breathes in a paper bag

Or maybe I do nothing. Play the games I have, let the seasonal sales pass, and reevaluate my options during the next major holiday. Considering Alpha 17 for 7DTD will be coming out in a month or so, and the Fallout 76 Beta will (presumably) happen before November, I could wait it all out.

Or maybe I just buy the fucking game I want and play; get it out of my system and on with my life.

Someone asked me the other day what I picked up during the Summer Steam sale. So here’s the list:

Altogether, that came to around $133.24. Is that a lot? Probably. Then again, that’s about the same price as Far Cry 3 and Civ 5 bought on Day 1. At least, that’s what I keep telling myself.

That, and Press™. In fact, couldn’t these just be considered business expenses? Hmm…

Man. If only there was, like, something interesting going on the world of gaming. You know, some tidbit of under-reported MMO news or some noteworthy announcement that happened in the last 24 hours or so. If it could demonstrate my somewhat embarrassing lack of forecasting abilities, that would be great too.

Less than 1 million subs now, but totally “well over” 500k, aka the event horizon of the money hole. There is not much else to say that has not been said in a dozen other blogs in your RSS, although I am inclined to point to Green Armadillo’s analysis over at Player Vs Developer for one-stop shopping; I agree with basically everything the dasypodidae said. Especially the confusion as to how a F2P model is supposed to work when the stuff being pay-gated is probably what the vast majority of players don’t care about, e.g. endgame.

My contribution to the discussion, such as it is, will be the following: 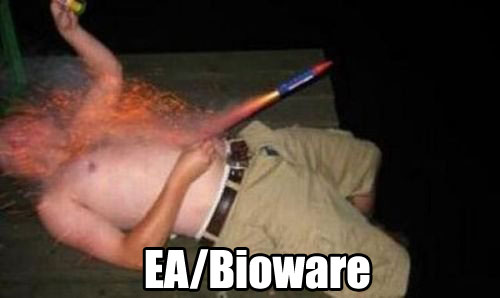 A fine company with a long history of good decision-making.

In other news, I finished Dead Island over the weekend, and just completed Orcs Must Die 2 mere hours ago, having played the entire Story-mode in co-op. Official reviews of both and others will be forthcoming. Then again… maybe not. The recent Steam Summer Sale haul included the following:

I almost pre-purchased Borderlands 2 since it was $40 via Dealzon, before I realized that I am addicted to the thought of getting deals on videogames more than the actual playing thereof. At least, that is the only possible conclusion looking at my (digital) library. I was feeling kinda bummed out at letting the Borderlands 2 deal slip away though – while it was never supposed to be a sort of Day 1 purchase to me, I was definitely looking forward to it sooner rather than later – until my friend said “Steam Winter Sale.” God dammit.

I am looking forward to hitting up SWTOR once it goes F2P though, assuming GW2 plays out as I expect and I don’t do a full relapse with MoP. Throwing down $15 for the box a week or so from now is not asking much, but like I mentioned earlier, it is all about the dealz. And it is hard to argue with “free several months from now” when there is plenty to do in the midterm.

I am not going to talk about gaming today.

The Steam Summer Sale is in full swing, but all I am doing is buying games I am not going to play until months later. I mean, seriously, when am I going to play five Prince of Persia games? For $12.24, the answer is: probably someday at that price. The current routine is one farming circuit in Diablo 3, followed by probably ~2 hours of Battlefield 3, and capped off with a game I am actually trying to finish (Greed Inc). When I finish the latter, I will slot a new one in. Or maybe I will finally tire of one of the first two, and suddenly have 20+ free hours a week to rip through my growing collection.

By the way, it occurred to me that I have inexplicably not reviewed Fallout: New Vegas or Skyrim yet. Although I have plenty of material for both, I hate reviewing things months after I stopped playing them. Ergo, those are back on the table too. Eventually.

Anyway, what I really want to talk about is manga.

Cue exit stage left, if that is not your thing. Although if this isn’t your thing:

…then we can’t be friends anymore.

When I went on the beach vacation earlier this summer, I wanted to some light reading material. Not having a tablet or e-reader, I wondered if my iPod Touch would be enough to read something. Books? Kind of a pain. Manga? Surprisingly well. Rather than go through the hassle of uploading them as pictures and dealing with weird resolutions, I looked around for an app that did that. I found one: Manga Storm.

Like many apps, you can try it for free with an ad bar down at the bottom of the menu screen, or “unlock” it for $3.99 (which I recommend). It basically can search through five separate manga depositories – MangaFox, MangaReader.net, MangaEden, Batoto, and MangaHere – and pull anything in those catalogs for free. You can even download all the chapters, so you can read them later sans WiFi.

The really popular stuff like One Piece and Naruto cannot be accessed for some reason, but a ton of other quality manga can. My recent history includes:

By the way, if you never heard of YKK, I recommend it. It follows the deeply serene adventures of an android in the most relaxing post-apocalyptic setting I have ever seen. There is no violence or real drama, but it was pretty effective at evoking feelings of future-nostalgia. One of my favorite sections was this one:

I bring all this up for several reasons, but the biggest is as a means of soliciting manga recommendations. Do you guys have any? As my history list earlier hopefully demonstrates, I am fairly open-minded when it comes to the medium. All I am looking for is at least two of the following:

Manga like Sekirei skews towards the ecchi side of things, but I have zero problems with that. The end-goal is filling in those empty minutes while waiting for a BF3 map to load or for me to get tired enough to actually sleep. Ordinary, or extraordinary; slice-of-life, or epic magnum opus; new, or old; juvenile high school comedy, or Grave of the Fireflies. I want them all, if they meet 2 of the 3 criteria. Or maybe even just one… I’m running out of Angry Birds: Rio levels and I’ll be damned if I go back to Tiny Tower.

P.S. Feel free to send an email (check the About page for the address) with your recommendations if you fear a comment will harm your gaming geek cred.