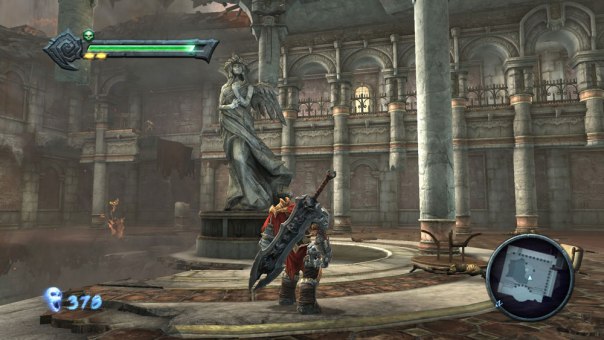 There are zero complaints in the visual department.

Darksiders is a 3rd-person action game with puzzle elements that tries to straddle the line between Devil May Cry/God of War demon-killing and the sort of casual world exploration and puzzles of Zelda games. You control War, one of the four horsemen, who gets framed for starting the apocalypse party early, which results in the death of the entire human race. As you struggle to clear your name and/or figure out who was responsible, you kill a lot of demons and four-story bosses while uncovering new items and re-unlocking your prior abilities.

While it seems the most popular comparison is with Zelda games instead of Devil May Cry, I just felt the puzzle elements in Darksiders were curiously out of place. The visually stunning post-apocalyptic landscape is rife with ready-made puzzle elements, but I never got over the fact that War couldn’t just scale that wall with his big-ass metal hand. Are you telling me I can wield a car like a baseball bat, but I can’t just stack some debris in the corner and use that to reach the 2nd floor? Why aren’t I just punching down every door I encounter, especially when I unlock the Gauntlet that lets me punch icebergs? While the puzzles do keep combat from growing too stale, after a while you realize that more than half of your game time is spent in empty rooms moving boxes around (etc). That might be fine thematically for a 14-year old elf-boy, but it never felt right for a horseman of the goddamn apocalypse.

That said, I did end up enjoying my time in Darksiders. The game is incredibly stylistic, the visuals are fantastic, and the action is pretty serviceable in a button-mashing way. Although I just pooh-poohed the puzzles, that is mainly because of the tone of the game, rather than the puzzles themselves being annoying. Indeed, while demon locks do appear on some doors arbitrarily, the majority of the puzzles are based on more “realistic” scenarios. You know, assuming that it’s realistic to punch subway cars into place but not use that same power to knock some tree limbs out of the way.

On a final note, if you play on the PC as I did, the port job is not especially keyboard-friendly; in terms of lazy port, it ranks up there with the original Borderlands for PC. I still WASD’d my way through the game anyway, but it was seriously annoying how anyone thought “Tab + number” was a good button combo to select abilities while running around. 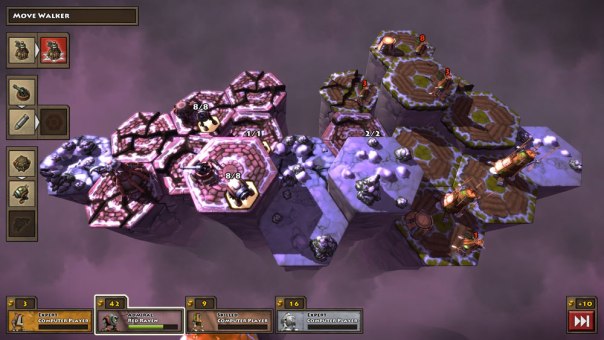 Greed Corp is a strategy game that is a lesson in efficient and frugal design. Whereas in an RTS-style game you can have three factions with totally unique units and hundreds of different forms of interaction, Greed Corp is pretty simple; there is one walker unit, one factory that builds walkers, one cannon, one consumable unit that flies walkers to a different hex, one harvesting building, and the resources being harvested is the terrain itself. The goal is to use all of those things to remove your opposition from the map, sometimes quite literally.

Regardless, there is can be a surprising bit of depth to the shenanigans. For example, the harvesters knock its own hex and all surrounding hexes down one level at the beginning of your turn (hexes brought below level 1 crumble apart). There is no way to remove a harvesters other than self-destructing it, which knocks another level off each surrounding hex, along with sinking the main hex down into the abyss. What this can lead to is sending a single unit flying into your enemy’s island territory, plopping down a harvester, and laughing maniacally (or sobbing in frustration, depending) as that whole island eventually breaks apart.

Eventually though, my enjoyment evaporated once the late-game Expert-level AI opponents started demonstrating the weaknesses of perfectly symmetrical maps. Namely that it didn’t matter how clever your own strategy was when all it takes is one of the three random opponents to opportunistically ruin your day. When the outcome of your best-laid plans devolve into “whoever moves last wins,” it is time to move on.

In essence, Nimbus is a pretty simple twitch-based puzzle-platformer… sorta. You control a ship that has no means of self-propulsion, and thus must rely entirely on environmental objects and inertia to ensure you do not become stranded on the ground (which kills you). Some of those objects are bumpers that always gives you a set amount of boost when collided with, some are speed squares that can accelerate you to dizzying velocity if you loop into them multiple times, and still others are little cannons which give you some respite along with directional control over your exit. The end goal is to touch the exit checkerboard squares as fast as possible, while also grabbing the secret coins hidden (sometimes diabolically) around the level if you are so inclined – doing so can sometimes unlock bonus levels.

It did not take me long to confirm that the old adage of “quick to learn, difficult to master” is fully applicable to Nimbus. While successful execution is the most important aspect of the game, Nimbus does a phenomenal job at keeping each level feeling fresh and unique like a brand new puzzle. Just when you start feeling comfortable with all the deadly spikes on the walls, you encounter a map that requires you to ram into spheres to trigger gate openings like a physics-based platformer. And just as you are getting used to some of the spheres having spikes on them, you are faced with a level where all the walls are made of deadly lasers. And then there are the ridiculous reverse-gravity levels. In short, Nimbus deftly avoids new puzzle elements feeling like gimmicks and more like natural progression.

I did not end up completing Nimbus though, as the later levels quickly outstripped my twitch abilities, even after ditching the keyboard for an Xbox controller. If you are not a fan of twitch platformers like Super Meat Boy, unfortunately you aren’t likely to enjoy Nimbus at all; there are few things more frustrating than knowing what you have to do, but running into that same goddamn spike wall for the 13th time in a row and redoing the entire level from scratch (there are checkpoint cannons, but sometimes only past certain points).

If you do happen to enjoy those sort of games though, Nimbus will certainly give you a run for your money. Not only are there secret coins to collect, but each level has a Steam leaderboard to compare best times as well.