I take no credit for either the title nor the picture: 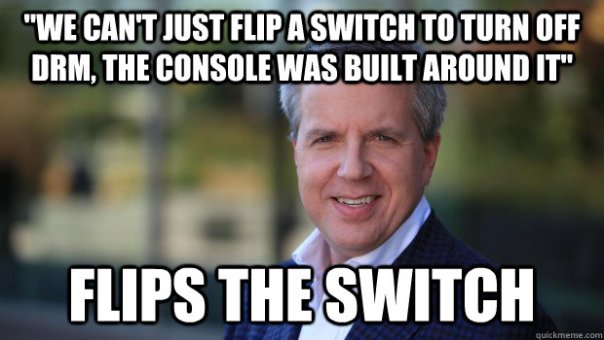 If you had not already felt the Earth’s sudden wobble from the magnitude of Microsoft’s about-face, allow me the pleasure of informing you: the Xbox One no longer has its ridiculous DRM. Namely:

One of the “casualties” of this Lance Armstrong-level backpedaling is that you can’t have that whole “10-person family sharing” plan or the ability to “take your games anywhere by logging in.” Often lost amongst the Apologist tears though was the simple fact that logging on from a friend’s Xbox One basically meant you would have had to wait for a 10+ GB download before playing anyway. And what were the odds that more than one member of the family could play the same game at the same time? In other words, you are not any worse off than the present system of just taking the disc with you.

Plus, you know, used games.

On a semi-related bit of interesting news, apparently Valve snuck some interesting code into the Steam software: shared libraries, e.g. lending digital games. Obviously nothing is formally implemented yet, but the premise seems to be that once you lend a game to a friend, they can play it until you log on to play it yourself (which then bumps them off). Which is… pretty remarkably clever if you think about it. Valve could just as easily went the other way, where you couldn’t play until your friend “gave it back,” which would probably discourage people from using the feature at all. Assuming there is no transaction fee or anything, I would feel comfortable giving one or two of my Steam buddies access to everything.

Regardless of which way the shared library plays out – if it plays out at all – today was a huge win for consumers everywhere. I am not quite ready to declare victory yet, but the future sure is looking considerably brighter than it was, oh, two weeks ago, eh?