After becoming increasingly disenchanted with Scrolls while still craving a card-game experience, I found out that SolForge was in Open Beta as a F2P game. On Steam, no less. Score!

I have to consciously not read that as Solf Rge.

SolForge plays a lot differently than many other CCGs (there is no trading that I’m aware of): it has the most distilled, fast-paced card gameplay that I have ever seen, outside of maybe Dominion. The basic premise is that you build a 30-card deck with the goal of reducing your opponent from 100 HP to zero. There are four “factions” that roughly correspond with certain card themes, and your deck is limited to having cards from only two factions. Each player draws five cards, someone is selected to play first, and then you see this screen:

The first big twist is that there are no resources to manage. On your turn, you can play two cards from your hand, be they creatures or spells. When you play any card, an upgraded version of that card is shuffled back into your deck. There is a combat step where all creatures attack, and you can trigger it at any point during your turn (before, in the middle of, or after you played your cards). At the end of your turn, any leftover cards in your hand are also shuffled back into your deck and you draw a new hand of five cards. Every four turns or so, your avatar “levels up” and then you are able to start actually drawing the upgraded versions of the cards you played previously (even if the original is still on the board).

A quick note about the leveled-up cards: it is way more strategic than you think. A lot of cards might have an especially weak Level 1 form, only to ramp up in power with Level 2 and Level 3. Others are strong Level 1 contenders, but feature a definite lack of scaling that almost make them dead-draws in the endgame. Still others sort of force you to use them early to keep them relevant at all. An example of the latter is Cull the Weak, a removal card which destroys a creature with 4 Attack or less, which ramps up to 7 or less and finally 14 or less at Level 3. Played early, Cull will serve you immensely well into the late stages of the game; drawing into a Level 1 Cull around Turn 15 though, and it may as well be a blank card.

Examples of the first two types of cards (late vs early game focus) can be seen here: 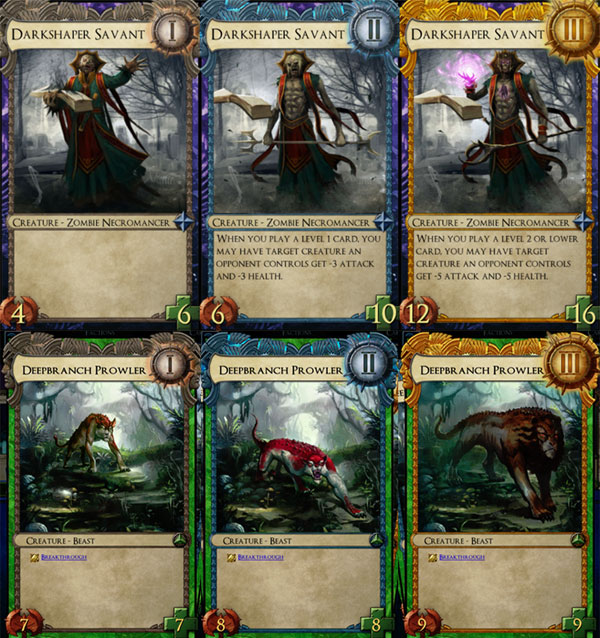 The Darkshaper is by far my favorite card in my collection.

Where things really get (further) mind-bending is combat. Creatures you play are “On Defensive” until the start of your next turn, meaning they won’t initiate combat. Creatures will also stay in the lane you played them in (unless they have the Mobility trait), attacking anything directly across from them. Once creatures are “On the Offensive,” they will attack every turn. As in, creatures will attack on your turn, and then attack again on your opponent’s turn. Damage a creature takes is permanent, as are most boosts and the like. As you might imagine, creatures die pretty quick; conversely, this means that any creature that does stick around (especially if they have a nice ability) start becoming increasingly dangerous.

What I am failing to get across in words is this: the tempo is SolForge is insane. And addicting. Let’s say that I play a 5/5 creature and my opponent then plays a 7/7 across from it. If I do nothing, my 5/5 will automatically run to its death, and my opponent will begin dealing 7 damage a turn with the now 7/2 creature. Before the attack phase, I might cast a spell that gives one creature +3 attack and another creature -3 attack, making the match-up a 8/5 versus a 4/7. On my opponent’s turn, if he/she doesn’t kill the creature with a spell or throw another creature in front of my now 8/1, it will attack again on his/her turn.

Goddammit, words aren’t working. Here was board position of the closest fight I have ever seen: 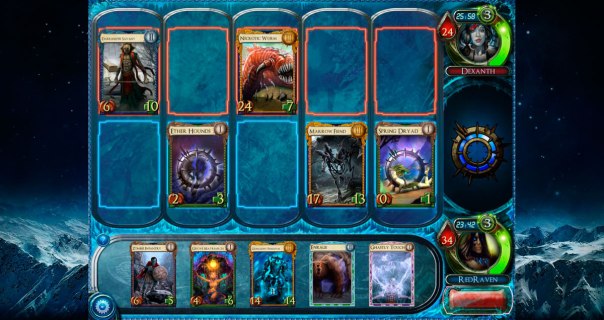 There has to be a way out…

It is my opponent’s turn, late in the endgame. His creatures are the 6/10 Savant that let’s him give a creature -3/-3 whenever he casts a Level 1 spell, and “just” a 24/7 wurm. Mine are all just vanilla creatures aside from the Dryad, which gets +1/+1 each time a creature comes into play on my side. He just cast the +3 Attack/-3 Attack spell I mentioned earlier, targeting his wurm and my dryad, taking out one of my 2/3 Ether Hounds with the -3/-3 trigger. He then plays his own Ether Hounds, providing blockers for my Dryad and Marrow Fiend, using the Savant’s trigger to kill my last Ether Hound. He attacks, creatures die, and we go down to 7 and 4 HP respectfully.

What are my options on my upcoming turn? Well… the 6/5 is just a vanilla creature; the 4/6 will spawn a 1/1 creature in its space after it dies; the 14/14 creature has Mobility and gets +6/+6 when a creature dies across from it; the card Enrage gives a creature +5/+5; and the last card gives a creature -3/-3. Hmm. After I make my moves, the board looks like this:

Not horse-shoes or hand grenades, unfortunately.

I had tossed my 14/14 in front of the Savant because the -3/-3 triggers were generating insane card advantage, and would basically negate my center lane gambit. Said gambit was tossing in the 4/6 creature in the path of the 24/7, and relying on the 1/1 that spawned after its death to give me the reprieve I needed to win. And, in fact, I would have won on his turn, but he managed to cast either another Savant or perhaps a Gloomreaper Witch (kills a 1-power creature when it comes into play) to remove my 1/1 and block my 20/14, and then some other throwaway creature to stand in front of my 17/11. The wurm, unopposed, kills me. GG.

Whether all of that sounds like gobbledygook or a smashing good time probably depends on how familiar you are with card games, or with Magic specifically. Oh, did I forget to mention that? Richard fucking Garfield had a hand in SolForge’s development, along with the guys who made Ascension, who were already pro Magic players. Now that I think about it, Richard fucking Garfield worked on Card Hunter too. Dude gets around. Considering how everything he touches seems to directly trigger my nucleus accumbens, I’m going to say that this is a Good Thing.

Less so for my wallet.