After having spent some additional time with Wildstar, my impression has soured rather significantly.

I touched on it before, but I really need to reiterate how bad Carbine is screwing up questing. We have known since 2012 that they decided on Twitter-length quest text “because nobody reads it anyway,” but this rather disturbingly flippant attitude results in perhaps the most banal leveling process I have experienced in an MMO. It is one thing to reduce all quests down to kill X mobs or click on Y things, but it’s another thing entirely to not even bother papering over the activities with clever writing. I read quest text because it is the only real difference between MMO A and MMO B, in terms of doing things. With Wildstar, I was about 15 quests in before realizing I was wasting my time reading even their Twitter quests.

“Good job. Do this over there now!” Okay… where is “there?” What am I accomplishing? Ultimately, the truncated dialog doesn’t even matter because it’s faster to just click on the Quest Laundry List to get a directional arrow and rangefinder to tell you exactly where to go. And once you arrive, click on the shiny things, tunnel vision down the Challenge, and follow the next arrow somewhere else. At a certain point, I have to wonder if Wildstar could have pulled off an MMO without NPCs or dialog at all. By the end of the beta, I was barely even looking at the environment. 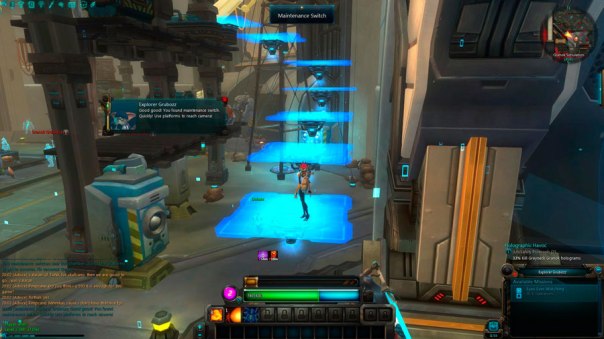 By the way, the Path system isn’t going to save anything. I tried the Scientist (click on these things with actual lore attached to them), the Settler (click on these things), and Explorer (jumping puzzles + uncover the map) without any real sense about why Carbine decided to compartmentalize the few quests that aren’t bag-n-tag. Maybe they get amazing later, but the only real thing that set them apart from one another are the special abilities that you unlock at the end. The Scientist, for example, can summon party members to his/her location and eventually create portals to the Capital City. Explorers get to triple jump on a 30-min cooldown and the equivalent of the WoW Monk ability Transcendence. Settlers are probably the best in that they create buff stations (that last 60 seconds…) that can grant 30-min buffs like +50% run-speed, bonus XP, and can eventually drop vendors (and I think bank bots, I don’t remember).

Combat-wise, it was not until I read someone describing combat as staring at blue and red circles on the floor that I realized, yes, that is entirely accurate. My initial positive combat experience also seemed to have been colored by a relatively powerful, EZ-mode-esque Stalker class. I tried out the Spellslinger and was shocked to discover that being rooted to the ground for some abilities is a thing. Don’t get me wrong, I’m fine with the idea generally, but it feels particularly incongruent with Wildstar’s “action move move move huzzah!” zeitgeist. Playing the Engineer sort of cemented the experience that, yes, combat is not nearly as crisp or impactful as I felt on the Stalker. And that there are some serious concerns about the long-term viability of ranged classes.

By the way, take a look at some Warplot PvP:

Supposedly, group content is not quite as much of a visual disaster (you only see the green zones from other players). But hey, who actually knows what will happen in 40m exclusive raids, with attunements no less. A pretty bold plan to double-down on vanilla WoW mechanics in the same year that Blizzard thinks downsizing to 20m raids is more viable with their 7 million subscribers.

And, really, that combination of factors took Wildstar from Hype Train to trainwreck in my eyes. If your endgame is “40m raiding or die,” if your PvP is an epileptic seizure waiting to happen, and if your leveling game is a plotless point-n-click adventure, then… what’s left to justify $60 and a subscription? Player housing? Hoverboards? To an extent, I recognize that it’s a bit harsh to make judgment calls about an MMO based upon the sub-level 20 experience, but… well, should we really be giving games such a free pass anyway? Not at full MSRP, that’s for goddamn sure. 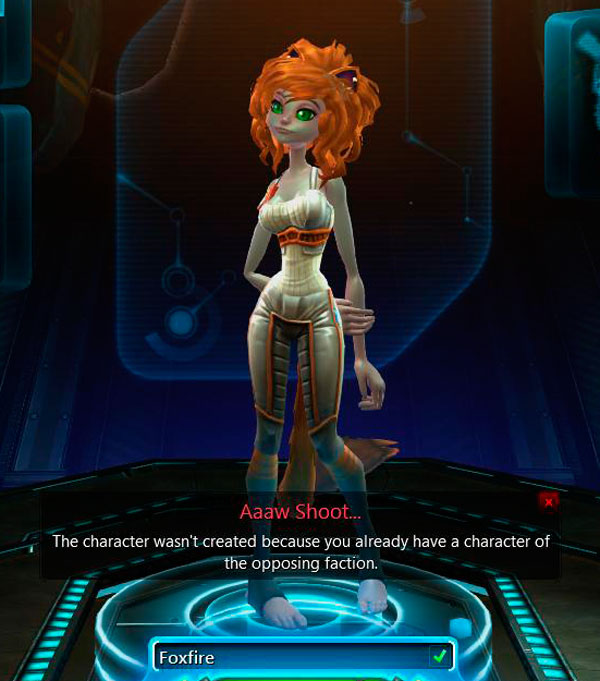 Oh, and this is a thing too.

Of course, sometimes these decisions get made for you. Four members of my ex-WoW crew are playing Day 1. If you order it via GMG, you get 20% off. There’s no way the game is worth full MSRP… but how about $48? Ughhhh. Well. I have at least until Monday to make my decision (assuming GMG’s latest 20% coupon doesn’t come back in time), whatever that ends up being.