In an effort to both delay poor decision-making and assuage the pain of not having purchased Titanfall for $48 via GMG, I decided to download and play Hawken this weekend. Apparently the game is still in open beta (since December 2012), even though I could have sworn it had been released already, but whatever.

Hawken is a F2P F2Download FPS mech PvP game. Considering it too has a 6v6 player limit, there are a lot of amusing parallels to Titanfall, actually. The mech combat feels legitimately like you are inside a mech – it takes time to get momentum going when moving, your turning speed is slow, and so on. That being said, your maneuverability is actually pretty good with the assistance of thrusters, allowing you limited ability to fly through the air, do quick dodges, and do a 180-spin. Some mechs have larger (regenerating) fuel reserves than others, and there are lighter mechs that can perform all sorts of mid-air acrobatics.

The shooting feels pretty good and the TTK (Time To Kill) seems reasonable; you frequently have enough time to register you are taking damage and get to cover without dropping past 50%. All mechs can repair themselves, but it leaves you insanely vulnerable for up to 10+ seconds, the first few of which do not repair you at all. There are a few other ways to get some repair action going (defeated mechs drop health orb things), but I actually like how “sticky” damage ends up being; the prevalence of cover-based firing plus regenerating HP in FPS games has led to an over-reliance of ultra-short TTK, in my opinion. In other words, in Hawken you can dance around cover taking potshots at enemies, but eventually you’ll have to give them the opportunity to rush your position. 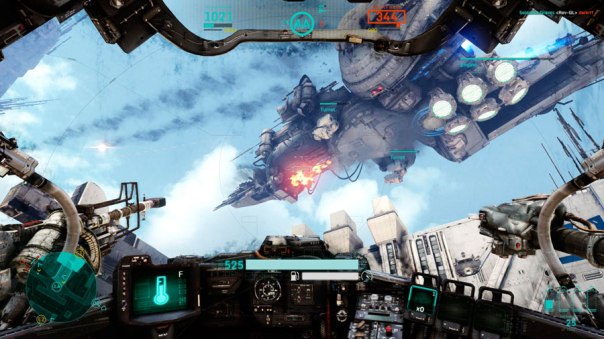 Out of the very few games modes Hawken has, the most unique is probably Siege. Basically, each side attempts to gather power resources from either power stations or stealing it from downed mechs, and then deposit it back at their base. Once enough has been gathered, a capital ship appears and starts slowly flying towards the enemy base. At this point, the main goal is “capping” the AA turret in the middle of the map, as it will quickly destroy an opposing ship. If the ship gets within range of the enemy base, it will start damaging it, and your side wins when the base HP goes to zero. If both sides summon a capital ship, they will duke it out in the skies above.

Most interestingly though, your own mechs can fire at the capital ship and deal damage. There are exposed turrets that can be destroyed to significantly reduce the offensive power of a ship, and with enough time even a single mech can whittle the rest of the ship’s hull down with concentrated fire at the engines. All of which introduce neat little dilemmas throughout the battle: do you focus on gaining power, or slowing the enemy’s power gains? Do you bunker down on the AA and hope someone else on your team caps power? Do you assault the AA or do you spend time shooting the capital ships from the ground?

Having said all that, the main concern with these sorts of game are the progression/reward system. And it’s here that I feel Hawken flounders a bit. 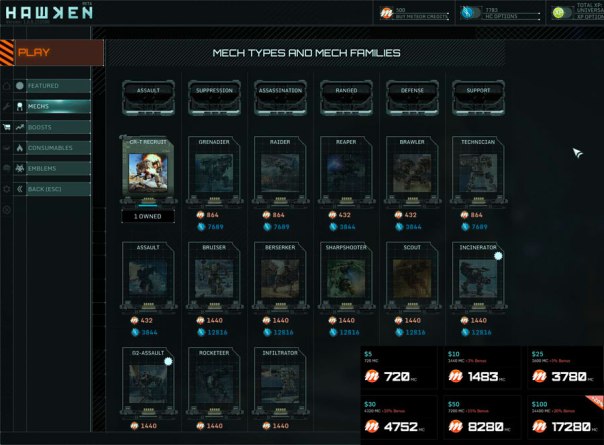 If you have a $100 option in your F2P game, please reevaluate your life choices.

Pretty much every single thing is an unlock you purchase with Hawken Credits (HC) or with the RMT Meteor Credits (MC). While you start off with a rather large sum of HC, each subsequent battle adds maybe +250 HC at the top end. Sometimes you get as little as 70 HC. Other mech chassis start at 3800 HC and go up to 12,000+ HC. While it is tempting to not spend any HC until you hit that first tier of new mechs, you forgo equipable items and passive abilities (costing anywhere from 300 to 3500 HC apiece) in the process, making you that much weaker for longer. And by the way, each equipment unlock is specific for that mech. Spend 3k MC on regenerating armor on one mech, and you’ll have to spend another 3k to unlock the same item elsewhere.

Is there any P2W? Strictly speaking: no. However, Hawken absolutely features strictly-better upgrades and arguably strictly-better mech types such that you can easily get creamed by more advanced players (who might have spent money to get there). At the most basic level, for example, items have one charge per respawn; their Mk III versions allows three charges per respawn. Thus, even though we might be able to say that grenades or EMP blasts or whatever is balanced, having access to them as essentially a spammable ability (cooldown aside) is not at all balanced in comparison to someone with just a single charge.

Overall, the game is decent enough for a 3.5gb F2Download title. There aren’t a whole lot of maps (7-8ish) or game modes (5) or even opponents (6v6), but the action nevertheless feels quick, responsive, and generally cool as a mech pilot blowing shit up. Hell, each mech’s ability to hover and dodge and boost forward almost made it feel like Titanfall for like a whole second there. Not the fairest of comparisons, of course, but there it is.