So… anyone got mobile strategy(-ish) game recommendations? I’m on a bit of a kick here.

I am currently playing Kingdom Rush and finding it rather fantastic. Tower Defense is one of those genres that seems sort of shallow on the face of it – and perhaps even is in the scheme of things – but I’m liking how it’s presented here in Kingdom Rush. You have the standard lanes, tower placement, and varied enemies with their rock-paper-scissors attributes. Even the implementation of a somewhat controllable hero and magic powers seems almost standard these days. 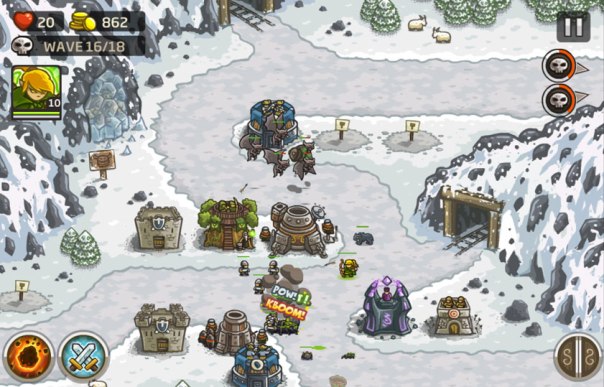 I could go AFK for the next two waves, honestly.

The thing that strikes me though is that the lanes in KR are wide. In other words, the enemies marching down the road and the resulting battles feel a bit more organic, as your soldiers might engage near the edge of the lane and allow a few enemies on the far end slip past. There is a granularity there, a sense that slight tweaks to troop or hero placement will result in better outcomes. Tower choice is such a huge change that there are clearly better options given the enemies you face (high magic defense vs high armor defense). Moving your troops just slightly to the left of the corner though? The result might be better just 5% of the time, but that 5% chance gives you the opportunity to demonstrate mastery over the game mechanics.

Of course, just like with most other Tower Defense games I have played, discovering OP combinations of towers usually results in me going through the motions for the rest of the game’s duration. I am definitely at that stage with Kingdom Rush right now, although it has lasted longer than other, similar games like Bloons.

So, yeah. I’m also playing Clash of Clans (near max TH7 base) at the moment. I have enjoyed the aforementioned Bloons TD 5, iBomber Defense, and the Anomaly series. I recently picked up Ironclad Tactics from the latest Humble Bundle but haven’t played it yet. Heard good things about Card Crawl too, and might actually pick it up if I can mentally prepare myself for playing on my tiny iPod Touch screen. Speaking of iPods, that reminds me of Hero Academy… another good one from back in the day. And presently perhaps? It’s been a while.

Give me your best strategy, Tower Defense, and/or card game games. Apps. Whatever.