← All the World a Dungeon
Hyper Hype →

While I missed it Live, I managed to watch that Warlords Q&A over the weekend. You can watch it yourself on Youtube, and I recommend doing so. It was simultaneously the most raw, unfiltered interview I’ve ever seen, and the most baffling and ultimately a little demoralizing.

Before I get into the details though, here’s how I did on the BINGO front: 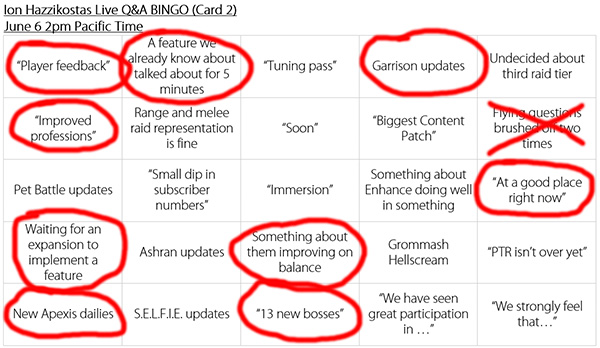 If you can’t bring yourself to watch the full hour of video, MMO-Champion has an extremely abbreviated synopsis and Wowhead has an interpretative transcript. What neither of them really gets across is the otherwise unbelievable number of times that Ion Hazzikostas comes right out and says “We screwed up” on a large number of topics. Like, I started getting a little embarrassed watching it, even though I felt Blizzard needed called on all of them.

Let’s start this in order though.

Although Ion stated that he “didn’t like speaking for the group,” by the time the Polygon interview went out stating flying was no more, that decision did represent a majority of the design team at the time. I have talked about this enough so I won’t belabor the point, other than to say how incredibly disheartening it is to hear that more than half of the design team are coming from such a different worldview. I mean, I would feel a little bit better if the argument was “flying takes too many resources” or something. In the absence of any explanation though, I must accept a reality in which the design team is either incompetent or are aligned with a completely different entertainment paradigm than myself. If they do not know how or why this game is fun to me, how can I expect them to continue delivering a fun game in the future? Or me to expect one to be delivered?

I’m glad that the majority of the design team ended up finding a compromise palatable to their alien sensibilities. But it’s getting pretty clear that any entertainment derived from this MMO will be in spite of the design instead of because of it.

“I’m really not going to defend [the 6.0 reputations] and say that they’re awesome and fun and engaging. They are completely mob grinds.” No, really, Ion said exactly that. The explanation is that Blizzard wasn’t going to do reputations at all this expansion, but decided to throw some shit together at the last minute because of the Trading Post and “other hooks.”

“Clear failure on our part.” Ion mentioned that Blizzard did the whole “thing Blizzard routinely does” in lurching from one extreme to another, in this case a reaction to the “World of Dailycraft” theme of Mists of Pandaria. The idea was that instead of doing 5 different quests in an area, you can do the equivalent of five different quests worth of miscellaneous stuff in that same area. Only this time, the rewards were shit and the lack of narrative makes the entire enterprise more nakedly grindy. That’s not even commentary on my part, that is what Ion basically said.

The design team was so caught up in making sure Garrisons as a system was worth doing, a lot of the activities you would normally do outside are instead done in your own little instance.

See above. Don’t worry though, Felblight will fix it.™

Alt Burnout due to Garrisons

Blizzard will nerf gold gains (Account-wide diminishing returns) to save you from yourself. In fact, they don’t like alts serving to enhance a single main character either. Which is another one of those “do you even play your own game?!” moments to me.

“That’s another one of our regrets.” Ion believes that Mythic dungeons will “salvage” the situation a little bit, before launching back into his whole “doing dungeons for Valor doesn’t make sense” tirade. Which is itself utterly bizarre given the fact that A) new reputation factions do this all the time, and B) Tanaan Jungle will be raining ilevel 650+ gear from the sky. Like literally what the fuck? Unless you are trying to actively “discourage the use” of the LFD tool – which I would not put it past them at this point – I don’t understand why else he or anyone would discourage group content in this way. Even if the dungeons are faceroll, it is at least social facerolling.

Why Are Demo Locks Being Nerfed?

“Because we’d rather you not play demonology.” That is a direct quote – look at Lore’s eyes when Ion says it. Hilarious. Less hilarious is the elaboration, which essentially boils down to Blizzard not liking how the spec plays out mechanically, but don’t want to actually fix it within an expansion, so they’d rather not have people playing the spec in the meantime. Which is… well, one way of doing it, I guess.

“We’re not trying to design rotations that feel engaging fighting a target dummy.” Again, direct quote. On the one hand, I can understand where they are coming from. If you are able to stand still and belt out your rotation with no downtime, chances are that the raid encounter itself is boring, e.g. you are not needing to move out of the fire, click the box, collapse for a meteor effect, etc. On the other hand… what? If your rotation isn’t engaging under perfect circumstances, when is it ever going to be engaging? So for all those hundreds of hours of clunky Retribution gameplay where you are desperately waiting for auto-attack procs to play your class, it was intended? Never going to be fixed?

Flabbergasted is the only way I can describe my reaction.

It’s better than it was in Mists, but every raid should have a Disc Priest, yes. Sorry.

Guys, I don’t even know any more. Maybe the developers have always been this way behind the scenes, and we just never saw them like this. Maybe the huge influx of interns have diluted the talent pool. Or perhaps we are just all trapped in an incomprehensible universe, devoid of meaning but otherwise working as intended.

I just… I dunno. I’m just going to play some videogames instead of thinking about this anymore.