Not Sure About Fallout Shelter

Months after it lost almost all topical relevance, Fallout Shelter was finally released on Android systems. After quickly downloading it and playing it for the last two days or so, I’m not entirely sure whether it’s actually good or not.

That room was so busy that I’m not surprised it burst into flame.

In the broad genre that is time management games – in which I place all apps that feature activity timers – Fallout Shelter attempts to ride the line between time management and “normal” games. It features the construction of resource rooms and trying to maintain certain levels of supplies, but the timers themselves are generally incredibly short. A Gold Mine in Clash of Clans might take 12+ hours to fill to capacity, for example, but a fully-staffed room in Fallout Shelter might be ready to be clicked in four minutes or less. String enough of these events along – including tapping Dwellers to level them up, rearranging room makeups, planning ahead, etc – and you can legitimately play for 30 minutes or more at a time.

It is also entirely possible that you enter a depressing death spiral from which there hardly seems to be any escape.

My first Vault was a disaster. I did not think I was expanding too quickly, but my glee at having a one-man repopulation strategy (mainly because it amused me) backfired when six, resource-consuming kids suddenly materialized. As it turns out, bitches be thirsty. The lack of water led to widespread radiation poisoning, reducing all Dweller HP down to 50% and zeroing out their happiness. 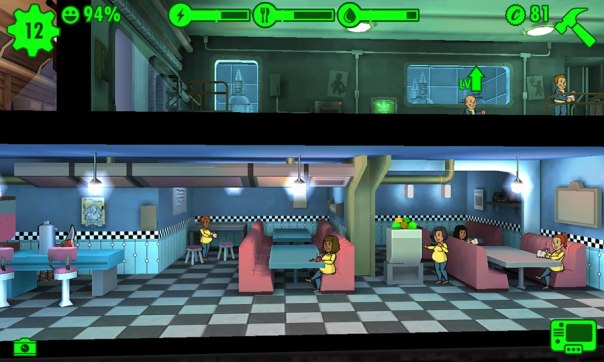 It seemed like a good idea at the time…

At that point, I did not have enough Caps to build more Water Treatment rooms, and Caps themselves are a resource that is only gained from A) Wasteland exploring, B) selling items, C) Rushing rooms, or D) spontaneously when collecting other resources. Between the radiation and everything else, I did not have anyone to spare to send into the Wasteland, which subsequently meant I did not have any items to sell. Collecting resources provided no bonus Caps for the last dozen times I collected them. That left Rushing room, which carries a ~30% (and increasing) chance of failure.

Well, let me tell you something: 30% apparently means 99% in the Fallout world because I Rushed six different rooms and failed five times in a row. Each failure is an automatic Incident, which could be a fire or Radroach or even Mole Rat infestation. All of which lowers the HP of anyone in those rooms, by the way. At the end of things, so many of my Dwellers were inches from death that I considered it almost a mercy to wipe that saved game from existence.

Instead of deletion, I went ahead and took advantage of Shelter’s 3 save slots and just started a new Vault. Two of them, in fact. The second is probably the most advanced, but the third ended up netting me multiple Legendary (or at least super powerful) items and some extremely high-stat Dwellers from the half-dozen free cash shop “lunchboxes” every new Vault gets. A friend of mine told me he somehow got a level 30 Dweller complete with Power Armor and an AK-47 right from the start too. All of which makes me think the optimal strategy is creating multiple Vaults from the beginning and deleting the ones that don’t give you good loot. 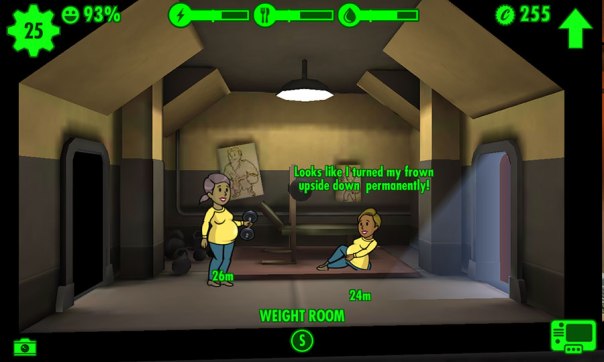 Incidentally, when I finally got back around to poking my head into the original disaster-Vault, everyone was still irradiated but back at 50% HP. I collected my resources and either hit the lottery or perhaps there is a timer-based failsafe on Caps collection. Plus, the six useless kids grew up to be rather useful Water Treatment slaves. The Vault turned around in a hurry, which leads me to believe that Shelter is leaning more towards the more traditional “play for 5 minutes every 5 hours” style.

Which would be nice… if not for the fact that Dwellers sent to explore the Wasteland continue exploring until they drop dead. You can revive them in the field for a (costly) fee, but the setup means they’ll die unless you log in every X hours. Or at least schedule yourself a log-in and send them a Recall signal. Which brings us closer to the “play in real-time spectrum.” Which is not useful for exploring, since the items you encounter are based on how many real-world minutes/hours your Dwellers are out in the wild.

The end result here is a bizarro game that is both fun and feels bad. Was my water death-spiral the result of poor decision-making on my part (probably), or an engineered trap to entice me to purchase lunchboxes (which always contains X Caps)? It’s nice that I can sometimes play for a longer period of time, but I also feel like I’m better off avoiding negative events by not playing for as long as possible. Except now I need to log in every X hours to retrieve my explorers.

Sigh. The things I do for love (of Fallout).