← Blizzard Still Got It…
Internalization →

…And Then Blizzard Lost It

These are interesting times we live in. And ones that seem to, on occasion, move very quickly.

The context, for posterity’s sake, is Blizzard confiscating the prize money from a recent Hearthstone event winner and banning him for a year due to a pro-Hong Kong Live interview statement. No, really. Here’s a link to the official Blizzard blog post, for however long that stays up:

Upon further review we have found the action has violated the 2019 Hearthstone Grandmasters Official Competition Rules section 6.1 (o) and is individual behavior which does not represent Blizzard or Hearthstone Esports. 6.1 (o) is found below.

Engaging in any act that, in Blizzard’s sole discretion, brings you into public disrepute, offends a portion or group of the public, or otherwise damages Blizzard image will result in removal from Grandmasters and reduction of the player’s prize total to $0 USD, in addition to other remedies which may be provided for under the Handbook and Blizzard’s Website Terms.

The Hearthstone and WoW subreddits have since erupted into a roiling boil. 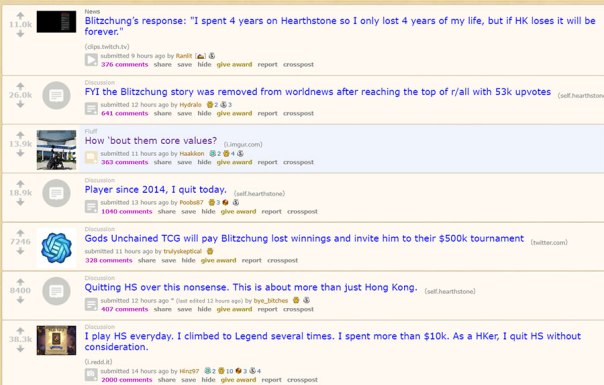 At least two prominent bloggers on my roll have said they will be canceling their subscriptions. If posts on Reddit can be believed, there are thousands of others doing likewise. Not a particularly good bit of PR right as patch 8.3 previews are making the rounds and Blizzcon is less than a month away.

Of course, none of it is likely to matter. Blizzard made a completely rational business decision.

Tencent owning a 5% stake in Activision Blizzard is almost wholly irrelevant in the broader truth that China is an insanely large market for games. Like $31 billion and growing to $41.5 billion in five years kind of big. By 2023 there will be more PC gamers in China than the entire population of the US. The latest news is that the US pulled ahead this year in terms of market size, but that is attributed to the fact that China freezed approval of new game licenses for almost a year and put restrictions on screen time for children. Even with zero investment from Tencent, losing access to that “second place” market would be a significant setback for any gaming company.

Don’t get me wrong, I consider China to be one of the most repressive, authoritarian regimes on the planet. But… up to this point, that didn’t seem to matter to anyone. It could be that this was just a particularly egregious example that shocked people into wakefulness, similar to certain phone calls to Ukraine. And that’s fine! Whatever it takes to get people to pay attention to the fact that corporations are not your friend, and that if it were profitable, these men and women board members would have a fiduciary obligation to their shareholders to destabilize the United States and/or any other country.

Canceling your subscription and deleting Blizzard games is one way to protest. I hope you don’t close Battle.net and boot up League of Legends (100% Tencent owned), anything on the Epic Games launcher (48.4% owned), PUBG (11.5%), Path of Exile (80%), Clash of Clans/Royale (84.3%), or any of the other games on the list though. Perhaps that is unfair, as I don’t think the Path of Exiles devs have banned pro-Hong Kong players for interviews. On the other hand, I don’t think these other companies were forced to let go of the tiger’s tail just yet. Nevermind any non-Tencent companies that would be willing to walk the same road for access to hundreds of millions of Chinese customers.

Incidentally, the makers of Gods Unchained (another digital card game) came out with this statement:

.@Blizzard_Ent just banned @blitzchungHS and stripped his Hearthstone winnings because they care about money more than freedom. We will pay for ALL his lost winnings and a ticket to our $500k tournament: no player should be punished for their beliefs. #freegaming

Cool, huh? I suppose it’s a bit easier to stand up to China when you build your card game around one-time printings of cards, including Mythic-rarity ones of which only four are printed per year, one of which just sold for $62,000:

A bargain at twice the price!

Ultimately, I do hope that Blizzard reverses course. I hope that all the negative PR and boycotting is effective enough at providing change. I hope that American companies will stop bending over backwards to appeal to oppressive regimes.

I had also hoped in the last election that people who would have literally died without Preexisting Conditions protections would not have voted for politicians expressly running to remove said protections, but here we are. This is the world in which we inhabit… until it bursts into flames.