I completed Prey over the weekend, after about 35 hours. 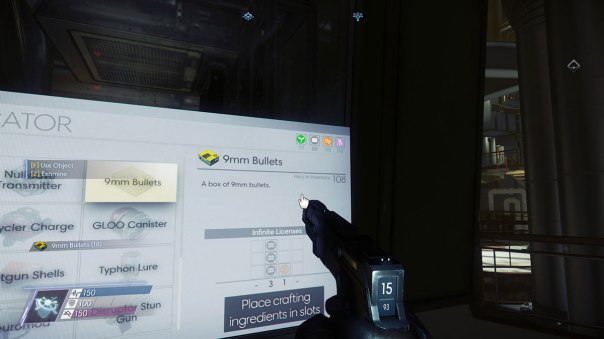 I could craft 870 rounds of ammo, if I wanted. Or if it mattered.

The majority of my concerns were comically overblown. Prey does tally up your behavior during play, but it only merits a single line of commentary at the end, and didn’t tip the scales in any case. I got the “best” ending doing the sort of things one would expect to merit a best ending, and that was that. Feel free to take all the special powers you want, unless you are specifically going for the achievement for not doing so.

How do I feel overall? Disappointed.

There are parts of Prey that are amazing. The GLOO Gun is an amazing tool that remains useful for 99% of the game. You can spend a lot of Neuromods to augment your jumping capabilities… or you can create your own path pretty much wherever, and whenever you want. At the same time, the GLOO Gun “platforms” are just tricky enough to utilize that you never think that it’s required to progress. In other words, it feels like the designers threw it into the game as a toy to play with, rather than a central mechanic (e.g. Gravity Gun in Half-Life 2), and thus you feel clever every time you use it to bypass obstacles.

The set pieces and overall level design are top-notch as well. The environment is cohesive and dense, making you feel as though you are exploring a real place. There is a ton of backtracking, which gets pretty annoying by the end of the game, but it also doesn’t necessarily feel artificial. Yes, if you want to track Volunteers, go to the Volunteer terminal. Yes, if you want to do something with Neuromods, go to the Neuromod area (again). 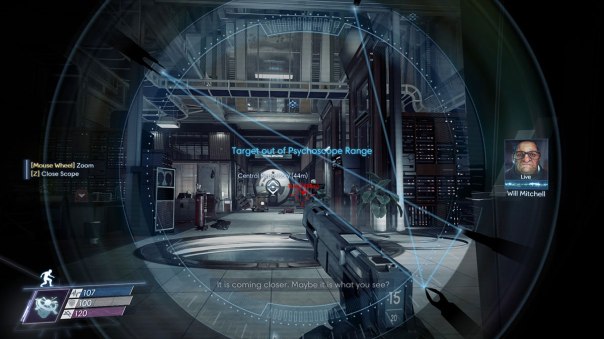 At least it’s not sepia-toned, but still… ugh.

Where the weakness starts creeping in is two-fold. First, the designers fell into the same design hole as Dishonored vis-a-vis “detective vision.” One of the marquee enemies you face in Prey are Mimics, which are capable of perfectly disguising themselves as chairs, coffee mugs, etc. After a few hours of exploring, you get a Psychoscope that will allow you to scan for Mimics. At this point, the rest of your gameplay experience will tunneled down a blurry circle, with buzzing in your ears.

Do you have to use the Psychoscope 24/7? No. It’s possible to pop it on to quickly glance through a room for Mimics, then turn it off. Hell, by the mid-game you likely have so many supplies and weapons that it won’t matter if you get ambushed by half a dozen at once. Nevertheless, you aren’t overtly punished for Psychoscoping the whole time… other than ruining the ambiance for yourself. Which, IMO, the is dev’s fault.

The other disappointing element is the ending.

Spoilers are below, but let me go ahead and create some more buffer.

This is basically Bioshock Infinite all over again. Not specifically with Alternate Universes, but in the fact that the devs thought they could take another of the most reviled, cliche plot devices in history and polish that turd till it gleamed.

Nope. Even a polished turd is still a turd.

The ending actually failed on multiple levels for me. First, it was essentially spoiled in-game around halfway through by completing a quest. I expected a bad ending for trying to bail from the station via escape pod without even doing anything, but wanted to “get it out of the way” so I could continue the correct way. What I wasn’t expecting was Alex’s words after the fade-to-black. Whoops! 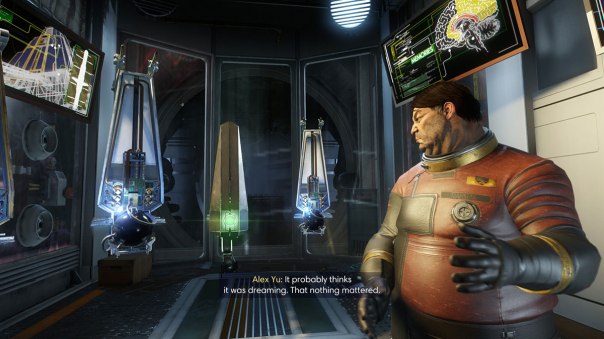 The second level of failure was using the “it’s all a dream” cliche, period. I have read some arguments that state this implementation actually made your simulated in-game actions matter, given the extra-special reveal. Nope, still doesn’t work for me. Just because I’m being evaluated on my simulated actions, doesn’t mean I view simulated actions with any particular regard – none of it actually happened. Maybe it’s “based on a true story” when it comes to Morgan, but if all my actions can be rebooted with the flick of a switch, I’d rather them not have occurred in the first place.

Finally, the ending actually ruined a lot of the nuance I had hitherto been impressed with. For the majority of the game, your one directive was blowing up the space station. Given that, the still-living crew were effective dead already… so why bother helping them out? Was it not more cruel to give them hope before killing them all? At the same time, I felt better easing their more immediate suffering, so they could relax and eventually accept their fate when the time came.

Oh, but hey! Now we have a sudden third solution that magically makes everything better, revealed in the final act! Those dilemmas aren’t really dilemmas anymore. And they never were anything but contrived, simulated scenarios in the first place to judge your empathy. Congrats on playing through the trolley problem – not metaphorically, but literally. Woo!

I’m sure the ending worked for some people, just as there are people who feel Bioshock Infinite is a real deep narrative instead of the total bullshit cop-out it is. The special, second reveal at the end of Prey was indeed surprising, and I guess novel in the scheme of things. Nevertheless, I did not feel any better about how none of what occurred actually did, nor did it apparently matter to the people of Earth. Hell, we still don’t even know what happened, or if anything is real. It could be simulations all the way down.

And that’s why the plot device is such bullshit. A sequel, assuming one ever exists, would have to have a radically different tone or go through a lot of effort to convince the player they weren’t being duped again. But I guess we won’t be seeing a sequel so none of it really matters.

Sort of like any of your actions in the game.

Tags: Any More Tags Would Be A Spoiler, Bioshock Infinite, Detective Vision, Prey

About halfway through this already worrying Kotaku article regarding The Witcher 3 is a section on Geralt’s “Witcher Vision”:

Witcher Vision is pretty cool. At any given moment, you can hold down a button to put Geralt’s field of vision into a sort of detective mode. This lets him see footprints, clues, key items, and the like. In practice, sleuthing around various environments—be they houses, dilapidated beach huts, or seemingly inconspicuous forests—isn’t very challenging, but it adds a lot to the feeling of being a Witcher.

All I could do was release a heavy sign and massage my temples.

“Detective vision” and its equivalents has never been good game design in any game I have ever played, for one specific reason: there is hardly any incentive to ever turn it off. Games with detective vision usually have hidden treasures and/or secret doors that are only visible in detective mode. This makes sense in a twisted-logic way, as why have detective vision at all if you can only use it in certain prescribed areas? That is basically “Press B to solve puzzle.” Of course, you don’t want to give players an ability that’s completely useless outside of specific zones either, for the same reason you don’t craft an elaborate cave complex with no treasure chest at the end. That’s just frustrating.

But the end result is that designers hide invisible things throughout the game because they feel they have to, and then the players end up spending the entire game with detective vision active so as to not miss these invisible things. Which means not only is nothing of use being accomplished (the actions cancel each other out), the player ends up spending the entire game in a sepia-colored wasteland devoid of all detail or immersion. 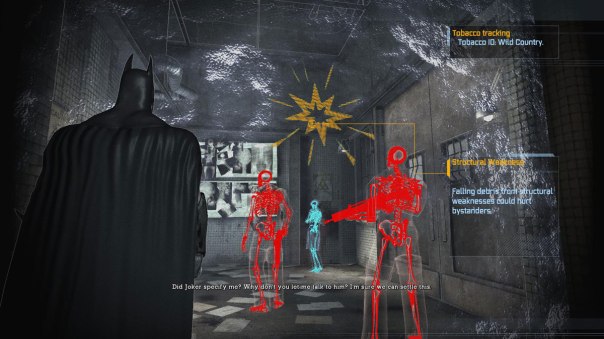 The bad guys may as well not even have character models.

Case in point: Batman Arkham Asylum. Played and beat it a few months ago, but I couldn’t even really tell you how the game looked, because I was in X-Ray vision nearly the whole damn time. Case in point: Dishonored. The Dark Vision spell is an early upgrade that trivializes even the highest difficulty, no-kill runs. Beautiful game environments reduced to sepia-colored vomit for the whole rest of the game. Hell, I didn’t even like the scan mechanic all the way back in the first Metroid Prime game for these same reasons. I just ran around trying to scan every damn thing, just in case. 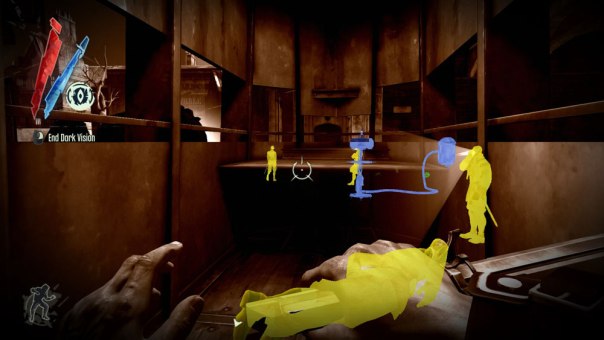 Around 90% of the time, your screen will look like this.

I honestly see no good solutions for this design issue. Even if you limit the player when they’re using detective vision (e.g. not letting them attack, or perhaps even move) that doesn’t stop players from feeling like they need to be utilizing it at every opportunity. Only allowing detective vision to be useable when there is something to detect is kinda asinine; why bother including it at all?

None of the solutions feel particularly good. One might think that the “search pulse” ability featured in Dragon Age: Inquisition, the original Witcher games, and many others might be better, but… I spend the whole damn game spamming those keys already. Same deal with the Battlefield series and PlanetSide 2, in spamming Q to spot enemies that I don’t actually see, but could be out there somewhere near my crosshairs. Sometimes it saves your life; there’s no reason not to.

This might well be one of those scenarios in which the “old school” solution of just making hidden things hard to find is best. At the same time, I don’t necessarily want to go back to the days of having to tab out and hit GameFAQs when I can’t find the pixels the designers wanted me to click on either. If I had to choose though, I would rather miss hidden treasure because I was too immersed in the game environment than miss it because I took a break from the otherwise permanent Instagram filters.