The other day I bought Metal Gear Survive for zero dollars.

A bargain at twice the price!

Although most of the internet would probably suggest that zero dollars is still too expensive for this game, I found it to be a rather fascinating experience.

Before I start, let’s address the elephant in the room: Konami sucks. Like him or hate him, Kojima is/was a ground-breaking (and budget-busting) designer and Konami will ultimately rue the day they let him go. That whole episode also marks the ignoble end to some of my favorite franchises too. So, in a way, Metal Gear Survive is a complete mockery of Kojima’s legacy – a survival game knockoff recycling the majority of Metal Gear Solid 5 assets in what is presumably a complete cash-grab.

That said… the MGS5 skeleton is better than most studios could dream of creating.

Metal Gear Survive surprised me right out of the gate with something novel. In the tutorial section of the game, your first weapon is a spear. Fantastic zombie-killing weapon, IMO, and I’m always surprised when no zombie game ever lets you craft one. Then you are introduced to chain link fences. And then they drop the bomb: you can stab zombies with a spear through the fence.

My amazement might sound factitious, but I’m being serious here. It’s a tiny, little thing that grounds the game in some sort of believability. It’s something you feel clever doing every time it occurs. There aren’t any spears in 7 Days to Die, and the only way you can attack zombies through something is if you build columns or have some kind of iron gate. I had been playing Metal Gear Survive for only an hour at this point, and already all future survival games will be judged based on whether I can attack through a chain link fence.

The boldness continued right on the second mission. The task itself was “download(?) the memory board” and the AI advisers warned me that “there will be some Wanderers (i.e. zombies) nearby.” Which, when I turned the corner and saw the building, happened to be a contender for understatement of the year. 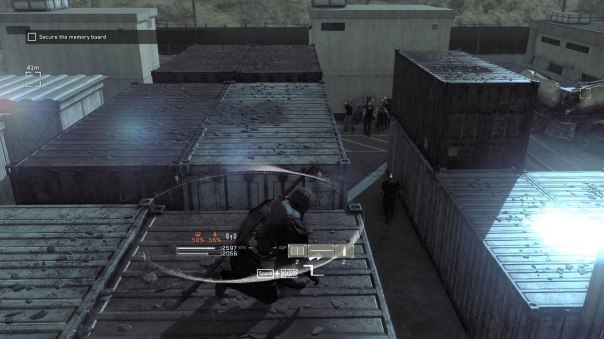 That was just half of the enemies milling about.

It’s the second goddamn mission, I have zero weapons other than a spear at this point, and the ability to build chain link fences. And while that sounds like an unstoppable combo, let me just say the devs have specifically accounted for situations in which there are dozens of zombies being held back by a flimsy chain link fence.

Legit freaked out the first time it happened.

Beyond that, the gameplay loop is… deceptively serious. Hunger and Thirst meters are present, and they dictate the maximum recovery level of your HP and Stamina meters, respectively. This means that if your hunger is at 25%, you can only ever heal back up to 25% HP. On top of this, food items are incredibly scarce. Animals will respawn, but it can take several real-world hours, which means you will spend the first dozen or hours of the game rather hungry.

On top of that, most of the game is spent exploring “the Dust.” The map is covered in a fog that requires you to wear an Oxygen mask to survive in, which is yet another meter to watch. Each time you are in a new area of the (Dust) map, your traditional tracking mechanisms, e.g. waypoints, will not work either. While there are distant lights you can use to kind of manually guide your progress, you can quite easily lose track of time or direction and otherwise get into a bad situation. 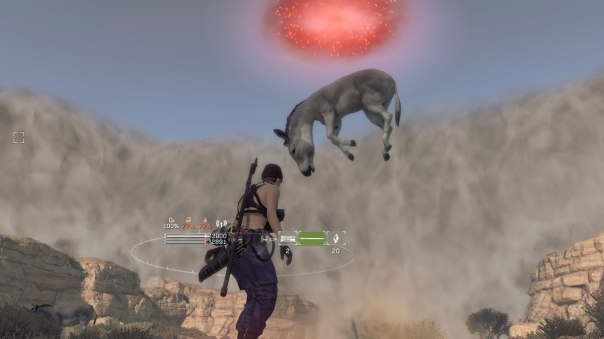 Teleporting Wild Ass back to your base is important too.

There is one final element that kind of brings this all together in a hardcore-ish way: Metal Gear Survive works on a Checkpoint Save system. Until you actually make it back to base camp, none of what you pick up or map or achieve counts for anything. If you die 5 seconds before the end of the mission, or if the thing you need to protect blows up, you start all over. While this isn’t too different from all the other survival games I have played, it certainly feels a tad more hardcore in practice, somehow. Possibly because in other survival games, you don’t necessary have to go into that clearly-dangerous area again.

In any case, I’m about a dozen hours into the game and continue to feel compelled to log in again and again. It’s not the best-looking survival game, and there are definitely pared-down elements compared to something like ARK or Fallout 76, but the combination of the formula and the MGS 5 vibe makes it very engaging to me. Even if everything else seems goofy as shit, on occasion.

I just completed the game this past weekend, with 28 hours played. My overall impression has soured somewhat in the meantime.

The first thing to note is that Konami didn’t just recycle assets, they recycled maps. I kinda already knew this heading into the game, but I found the experience rather jarring when a mission sent me to the mansion from MGS 5 for no particular reason. That is, there was a memory board located there that I needed to progress the story forward, but no actual storyline or plot purpose for the mansion itself to exist. There wasn’t even a boss fight or anything inside. Instead, it felt like the devs just said “oh, hey, there’s a mansion in these asset folders we haven’t used yet” and then slapped it in.

The second note is that the game’s cadence changes substantially in the latter half. Instead of survival, everything becomes long action sequences of surviving waves of zombie hordes. While this is not entirely out of character for the game, the fact that the last half-dozen mission are pseudo-time limited is. At no point did I feel the game adequately express the need to ensure that I had stocked up on enough ammo; that I managed to survive the onslaughts at all was a fluke of my hoarding nature.

15 minutes? Are you fucking kidding me?!

Finally, speaking of hoarding, the “endgame” itself radically changes from a resource-gathering perspective. Essentially, instead of wandering around afield in new locations, the optimal method is to simply teleport to every waypoint and gather whatever is located there, then teleport back to base to offload it. This gives you enough material for damn near everything… except for bullets. Specifically, gunpowder can only be collected from specific items you pick up. You can convert materials in dozens of different combinations – turning Iron into Gears, Nails, Steel, etc, etc – but you cannot convert anything into gunpowder. Which is especially frustrating considering that you can convert gunpowder into TNT, but can’t down-convert TNT into anything.

The end result is that you basically can’t really use guns as your primary weapon. Which is fine, I guess. Other games like Dead Island really emphasized melee weapons too. But the fact remains that Metal Gear Survive allows you to farm this gunpowder over the course of several hours, such that you could use guns as a primary weapon if you put in enough mindless time. This ultimately just makes the entire situation feel worse though.

In any event, I do not necessarily regret my hours spent in Metal Gear Survive. If nothing else, it reminded me of how engaging Metal Gear Solid 5 was, and how cool the Fox Engine could be for use in other games. That will… never be made. Sigh. Fuck Konami.

Tyler over at MMOBro makes the case for “getting over” lockboxes in games. I found the post interesting for several reasons, which I will get into in a bit. However, I do want to point out in the beginning that I agree with the premise: lockboxes aren’t going anywhere.

Even though they should. Specifically, into the garbage bin of bad game design.

One of the first of Tyler’s points is that lockboxes don’t literally destroy games. To which I would reply: not directly. Was the first iteration of Diablo 3 unplayable? Nope. Plenty of people were able to play the game just fine… for given amounts of fine.

From my perspective, the game was essentially broken in half. ARPGs in general (and especially Diablo) revolve around killing crowds of bad guys and hoping for good loot to drop, and the dopamine feedback loop simply didn’t exist when you could straight-up buy way better gear from the in-game AH. I was killing monsters hoping to get gold to buy better gear, rather than having any illusion that a monster might drop gear for me.

Perhaps even more problematic in Diablo 3’s case were the endgame difficulties. Since players could shop around and directly buy the best possible gear from a million other players’ drops, the endgame was balanced around Resistances and other stats that would be all but impossible to get within your own game sans AH. In other words, since you could buy good gear, the game designers had to create challenges that required that gear for it to be worthwhile, thereby creating cash-required progression.

Now, you might say that Diablo 3’s system wasn’t technically lockboxes at all. Semantics, I say. The point is that if you can buy power for cash, the player incentives in the game change, as do developers’ ultimate design goals.

But what about non-power purchases? Tyler starts out in the post by saying:

It can be a little irritating to see some gorgeous mount or awesome costume that you’ll never get unless you dump a small fortune into gambling boxes, but how much impact is that having on your moment to moment gameplay, really?

Later on, however, he gets to this part:

I also don’t think we should give up the fight to keep direct purchases part of MMO business models. Something I find frustrating about SW:TOR’s lock[box] obsession is not so much the boxes themselves, but the fact that almost nothing good ever gets added to the cash shop for direct sale.

That is precisely why this business model is so pernicious. As Tyler notes, there are plenty of MMOs out there which have survived just fine almost entirely on the backs of their lockbox revenue. Tyler was making that point in context of refuting lockboxes as short-term cash grabs, but the fact that they are in fact long-term revenue streams is more damning, IMO.

Lockboxes are long-term revenue streams because designers devote significant time to adding more stuff in them at direct expense to the rest of the game. Which makes perfect, rational sense. Under a traditional Buy-2-Play model, you get more money by making a better game. Under anything else, you get more of that game-adjacent thing, which NEVER improves the gameplay experience itself. Because it is never a part of the actual game.

Later, game designers get this defense:

And let’s stop demonizing developers for adding lockboxes to games. […] They’re just trying to turn a profit and earn a living, like everyone else in our capitalist society.

As I mentioned at the beginning, lockboxes aren’t going anywhere in spite of their abhorrent, exploitative, design-destroying influences, precisely because they work. And to be clear, lockboxes work the same way that cigarettes “work,” with similar (metaphorical) long-term effects. Lockboxes never, in any way, ADD anything of value to the game design itself; all of those cool mounts and skins could have been added for achievements, as rewards for skill, at the end of a long quest chain, or anywhere at all that reinforces the core gameplay loop.

At best, lockboxes funds game development in a roundabout way. Which sort of begs the question as to why these designers don’t just go full Konami and get into the Pachinko business to which they clearly aspire. Or, you know, perhaps make a product worth purchasing on its own merits.