(e.g. Why I Stopped Playing: The Division)

I can show you precisely the moment I decided to stop playing The Division: 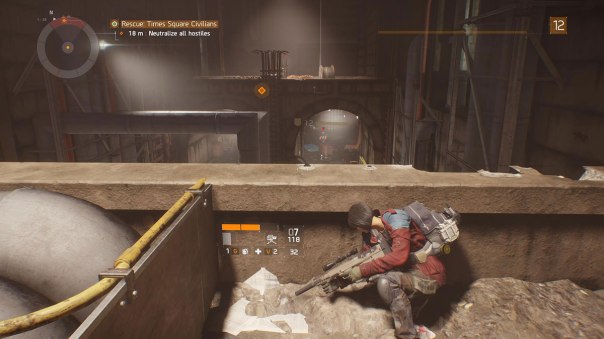 There is nothing particularly special about this “boss” character. I had actually died to him once already, as he has a machine gun and is able to just keep firing for like 30 seconds as he walks around your cover and mows you down in a realistic way. Having respawned, I was able to safely stay at my pictured elevated position. I was compelled to take this screenshot because I just shot this dude 5 times in the face with a sniper rifle, and he still has a sliver of “armor” left.

I have had a tone issue with The Division almost from the beginning. This is not a game where you are shooting zombies. You are not even shooting infected people behaving erratically. You are shooting “looters” or “Cleaners” (who are trying to burn the infection out) or gang members or prisoners who broke out of jail. Granted, all of your enemies appear to be killing innocent civilians or otherwise impeding efforts to maintain law and order. But… The Division (thus far) made no attempt to even address the wholesale slaughter of people trying to survive in a government quarantine zone. 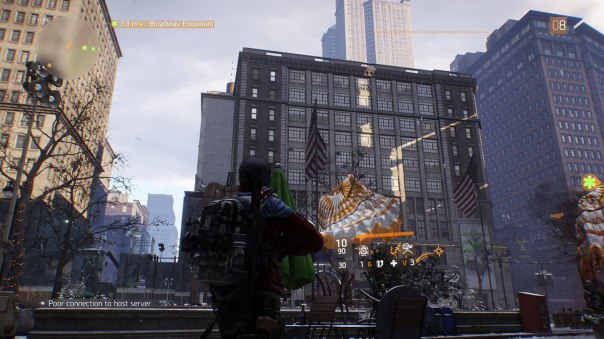 I bring this up because “motivation” is hugely critical in cover-based shooters for me. The core gameplay in these games is so banal and simplified, there is often nothing else to go on. Stay in cover, peek and shoot. Leave cover, die. The Division technically has some additional elements like special powers, and is definitely geared towards small-squad teamplay, including a trinity of sorts.

But otherwise? Peek and shoot. And 100% of the missions up to the point I stopped playing had been about killing people for vague reasons. Even when you are rescuing hostages, there is no sense that A) the hostages were actually being ransomed, or B) the hostages will be better off going back home.

I was actually going to quit playing two weeks ago, but Alex posted this live-action video in the comments. That was… kinda compelling, and set me in the right frame of mind for getting back into the game.

…at least up until I kept encountering these predictable boss characters, with their predictable face armor which takes a half-dozen sniper rifle rounds to remove.

I understand that the game is a looter shooter, and things are not supposed to make too much sense – not quite sure how a new holster is somehow giving me extra armor, but whatever. It would be quite the boring game if the first rifle you picked up from the body of an enemy was the same one you used throughout the entire experience.

But… I just can’t do it anymore. The Division just piles up too much unsupported nonsense and my suspension of disbelief cannot bear the weight. And if I don’t respect the setting and don’t care about the story, there is zero reason to play a cover-based shooter. So I’m not, anymore.

Comments Off on [WISP] The Division

Warframe was going so great. All the way up until I wall-ran into the payslope and slid back down on my space ninja ass.

The problem I currently have is that all of the blueprints I have available require materials I do not have enough of. In my specific case, it’s Plastids. While mobs do drop some resources, your primary source of most everything are breaking containers and opening lockers. This is essentially the equivalent of breaking clay pots in Diablo. But hey, it’s a looter shooter, right? No big deal.

Let me tell you, there is nothing more disillusioning than a space ninja terminator walking around at normal speed breaking open containers and opening lockers.

I was not expecting Warframe to be a JRPG in which you perform the equivalent of pressing X on everything to discover hidden Elixirs.

Alas, this is a F2P game with cash money solutions to the problems it arbitrarily introduces for that express purpose. I can buy 300 Plastids from “the Market” for 30 Platinum, and $20 will get me 370 Platinum. So… $1.67ish? Warframe will periodically give you 50% and even 75% off Platinum purchases for 48 hours coupons, so technically the price can be a bit lower than that. At a certain point, it absolutely makes more sense to pay to skip the parts of the game which require you to not play as a space ninja terminator. Both money and time are fungible, after all.

…then I remember that these designers do this shit on purpose.

For now, I will ignore my empty crafting queue and continue progressing through the story missions as best I can. There is technically a “resource extractor” that I can purchase with in-game currency that will presumably collect things like Plastids while I am away. It also apparently takes damage and could blow up if I do not retrieve it fast enough, e.g. leave it running for longer than a day. Because of course it does.

If I end up burning out from having to use the same weapons and classes I am stuck with, well, that’s the designers’ fault. I’m 25 hours into the game and am still hunting down the final blueprint that will allow me to “craft” a new class. Once that occurs, I’ll reevaluate and see where things stand. Considering that I only have two Warframe class slots by default, and have to pay Platinum to open more, things might get a bit cramped.

A while ago, I mentioned Warframe only in passing as a slick F2P loot grinder featuring space ninjas. Since that time, I gave it another shot to hook me, and hook me it did. It has now become my “I don’t know what I feel like doing” and “I only have 30 minutes to play” game.

I am still early on, but the general gameplay loop is finally big enough for me to slip through. The missing components were blueprints. As you might imagine, blueprints are necessary to construct new things like guns and other weapons, but also entirely new Warframes (e.g. classes). Once you have a blueprint, it will let you know how many of what resources you need to construct it – which might include components that themselves require blueprints – along with the Credits necessary to get started.

Credits in particular are a concern, as they are used for blueprints and upgrading the mods you get. In the beginning, I was spending pretty freely, for lack of anything else to spend them on (since I had no blueprints). Now? I’m pretty broke. While you can continue the story to unlock missions with greater Credit rewards, enemy levels continue to increase, which means you need to spend Credits upgrading your mods to have a chance, and so on. At some point, you have to grind/farm.

(Or, you know, pay real cash money, but nevermind.)

Luckily, Warframe doesn’t make things too painful. Every 20-30 minutes, there will be an alert on a specific map that grants bonus cash and occasionally a mod or blueprint as an extra reward. I have also discovered a few player-controlled areas which give generous Credit bonuses. Fundamentally, grinding isn’t too painful in Warframe because the moment-to-moment gameplay is fast and exciting. The minute that changes, the whole edifice will collapse in on itself, but until then there are plenty of “excuses” to jump/leap/bound/wall-run around maps like a goddamn space ninja terminator.

Ironically, something like Guild Wars 2 would normally have been my go-to game for incremental progress, but the expansion zones needing so much “Mastery XP” means that if an Event Train starts, you need to stay on-board lest you miss a significant chunk of progress. So, ultimately, the more serious I treat GW2, the more fun of a release Warframe becomes.