I was recently given a temp ban (1 hour) for “bad conduct” in Clash Royale 2v2. Said behavior was closing the app in the middle of a battle. This was actually fairly surprising, on multiple levels. 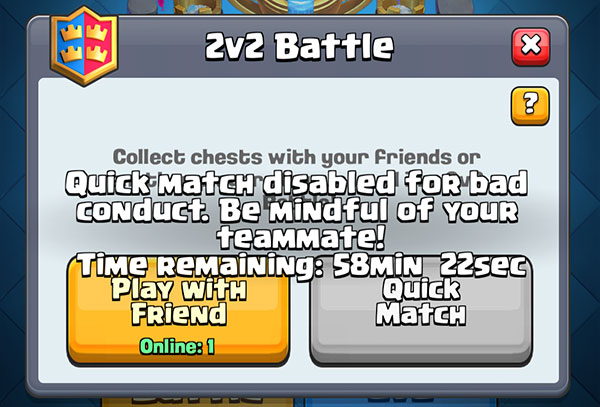 For one, I had never even heard that this feature existed. After some Googling, it appears that they added this feature back in April 2018. I’m not sure how much it scales up, or when it triggers, or when it might reset… but it’s there. Supposedly it happens when you quit two battles in quick succession, but that doesn’t seem to always be the case. I have certainly quit plenty of times mid-battle before this, but perhaps it only trigger specifically off closing the app.

For two, this explains why I have seen a lot more people not drop games. Instead, they will sit there at max mana and do nothing, or activate the opponent’s King Tower – which I actually see as polite, if you’re giving up – or perhaps be extra fancy with Tornado to end the game faster.

For three, it has been surprising how filled with (self-)righteous fury I am over this.

The 2v2 format in Clash Royale is not competitive. By which I mean there are no penalties for losing. The format exists for fun purposes, and Crown/Chest purposes. You always want a chest to be unlocking when you aren’t actively playing the game, and to get chests you either need to play 1v1 on ladder, risking your trophy count, or you can play 2v2. I can also maybe see the 2v2 format being conducive for deck-testing purposes. No penalties for losing, so you can save your trophies until you’re sure your off-meta deck has a chance.

So we have three reasons: fun, rewards, testing.

I left the game I did because my random partner played a level 10 Wizard directly into a level 13 Tesla. Like not accidentally played, but deliberately played, as if the Wizard would destroy it and live. The max level is 13. I am level 13 with a trophy count of 5023. At this trophy count, pretty much everyone has max-level cards; anything less is generally a liability given card interactions. For example, a level 13 Fireball will one-shot a level 12 Wizard (or Musketeer). For this reason, I actually did not run a level 12 Musketeer for months until I leveled her up the rest of the way.

My partner brought a level 10 Wizard to battle. I almost can’t even blame him, because when I looked at his profile afterwards, it turns out he’s level 10. I was paired with a level 10 against two level 12 opponents with an average of 5139 trophies each. In this scenario, which has repeated for the game before this one and the one after, it was bad conduct of me to concede the fight.

I am not sure what sort of matching algorithm Supercell has going on behind the scenes. It could be that this is a method of enforced win-rate balancing working against me, pushing me down closer to 50-50. It could be that the enemy team is currently in the “losing bracket” and I just happen to be their free win. Or perhaps my historical bad behavior has placed me in some kind of circle of purgatory until I atone for my sins.

What the literal shit, Supercell?

All that I know, what I feel in my very bones, is that the true bad behavior is “matching” me with a teammate with a fucking level 10 whatever in their deck. It isn’t fun, we have a zero chance to win, and they aren’t testing anything. It’s difficult to even suggest that, had I played seriously and poured my heart and soul into that battle, that the opponents would have even had fun. They had level 12-13 troops! If fun was to be had, they would have the same experience with neither of us playing anything at all.

But, whatever. If Supercell wishes to discourage rage quits by requiring the app to still be running, I shall set my phone down for a few minutes, still running. If Supercell wishes to be a bit more clever and require spending elixir during the entire battle, I will acquiesce with some mindless troop drops too. But if Supercell continues matching me with literally useless teammates? I shall craft a deck with my own, lowest-level cards and spread this misery as far wide and deep as it can go. Because if I cannot have real, legitimate fun, all that’s left is mischief and cruelty and trolling.

Clash Royale has veered into an interesting monetization direction.

The game has always had built-in P2W-lite elements, and still does. Specifically, you can buy gold and special treasure chests, both of which can accelerate your progression well above the curve. Will it be a permanent advantage? No. Eventually your overleveled troops will carry you to enough victories to place you where your power-level and skill levels indicate. That the system is (eventually) self-correcting does not diminish the fact that you bought wins, but nevermind.

These days, Supercell has fully committed to… emotes. Lots and lots of emotes. 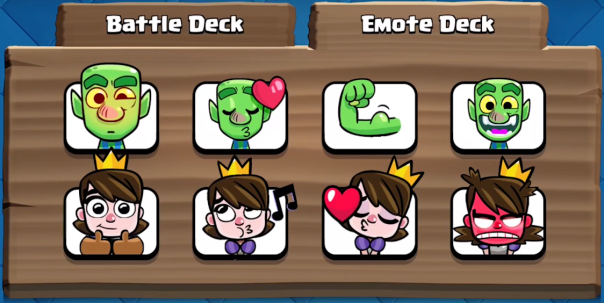 It’s been about two years since Supercell initially double-down on the emote trolling, only to back down three months later. The “backing down” required you to specifically mute your opponents every single game, but at some point they allowed the setting to stay on. However, one of the downsides was that muting emotes then muted them from your own teammate. There really wasn’t much communication possible via emotes, but it was sometimes useful to be able to “complain” about your partner’s inanity.

Towards the end of June of this year, Supercell released the new Goblin emotes. At first, I thought this seemed a bit silly. I mean, they were sold in $25 bundles that included a bunch of gold and cards which effectively made the emotes “free,” but it’s hard to imagine a company selling a sort of cosmetic item that anyone can just disable entirely. Later on, Supercell went on to just sell packages of emotes for $5, and mix and matching the types of bundles.

The funny thing is… I turned emotes back on. And I am somewhat serious about wanting to buy a certain combination of emotes.

The specific scenario I want to be able to communicate via emote is when my own 2v2 partner does something unbelievably fucking stupid. Like, every person I get matched with is supposed to be around my own skill level, right? So how can they be so dumb? It’s one thing to be interrupted while playing the game. It’s something else entirely to place troops poorly, or not at all, or basically get flustered and do random shit.

Goblins have a “roll eyes” and “this is fine (burning building)” emote and I want, nay, need to be able to communicate this to my opponents. Not my own teammate, because they either already know they fucked up, or are too stupid to comprehend it anyway. Just something a bit more… precise than simply the default “angry” emote plus sending a Fireball to the King Tower – the nigh-universal “I give up” action.

I didn’t think emotes could possibly work as a monetization strategy, especially when you can turn them off at will, but here we are. Supercell surprises me again.

I don’t think I have ever had something like matchmaking so completely and totally ruin a game for me. I mean, queuing up as Alliance for BGs in WoW was pretty bad towards the end, but Titanfall? Holy Jesus, it’s bad. So bad that I started an Imgur album to detail it. Examples: 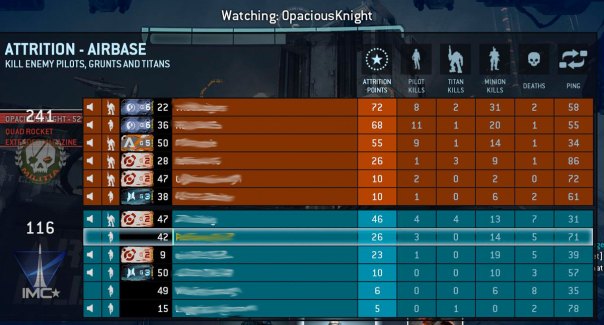 This matchmaking is so terrible it cannot possibly be random chance. I mean, I can understand a little bit of snowballing – god knows that if I see a veteran on my team, I play it out until I get sick of the game – but this sort of shit is just stupid. All Titanfall has is it’s moment-to-moment gameplay, so for you to face an entire 10 minute match with your nose in the carpet the entire goddamn time is worse than the most banal daily quest in any MMO. I’d rather be grinding Golden Lotus rep – at least at the end of the day, I’d have something to show for my blood, sweat, and ample tears.

I tried to play some PlanetSide 2 to wash the taste out of my mouth, but the game crashed to desktop after about 20 minutes.

Remember when I said I never buy games near their release days and/or at full MSRP? This is why. If I could resell Titanfall or get a refund, I would; then maybe come back when the developers got their shit together.