The original Space Pirates and Zombies (SPAZ) was a hidden indie gem back in the day, and saw me through almost 40 hours of gameplay. Granted, it had some lousy pacing and the early portions of the game weren’t particularly great either. But hey, it was done by a two-man dev team, and hit some great notes in the middle there somewhere. Hearing about SPAZ 2 being close to Early Access graduation and on a Steam sale to boot, I just had to take a look.

Where 99% of the gameplay takes place.

SPAZ 2 is set in same universe as the original, and even continues the story a bit. That and the ship names are pretty much the only things left in common with the original title. The principle “game” here is a sort of galaxy map… thing. I don’t really know what to call it. Simplified RTS? Except time only moves when your ship moves, so Real Time doesn’t fit. Nor does Strategy, now that I think about it. If anything, it reminds me of games like Eufloria, where you are basically collecting infinite resources and expanding your empire while everyone else is doing the same.

In the original game, combat was sorta handled like a twin-stick shooter. In SPAZ 2, combat is a formality. While you can elect to aim your weapons like you wish to actually play a videogame, the game’s tutorial advises to stick to “Battle Wagon” mode, which is where your weapons automatically fire and reload according to their ability to hit things within their range. The former supposedly allows you to target specific sections of enemy ships in an effort to break them off and commandeer them as your own, but the reality is that none of it really matters. Scrap, the currency of SPAZ 2, is abundant, and you’re unlikely to know what components your opponents are using anyway.

The utter lack of regard towards the combat system is, frankly, baffling. There is a video on Steam from the devs demonstrating how to play SPAZ 2 in VR mode. Holding RMB down even brings up a targeting reticle. But… why? No game systems support, encourage, or require any manual control during battles. I mean, there’s a tiny element in the bizarre looting system they have, as the components shot off from downed enemies is not assured to be in the normal post-combat loot table. But you can’t collect these pieces – you must physically bolt them onto your own ship. Which is another whole gameplay element that isn’t even defrosted, let alone half-baked: if components are popping off your ship, you are dying, and you won’t live long enough for it to matter.

Maybe all of this is due to me being in the early game still? Maybe it’s due to Early Access? I dunno. What I do know is that the fun of the original SPAZ came from combat, and everything else was a chore. In SPAZ 2, combat is now a chore, and you are left with extremely simplified empire management as your only element of gameplay.

Humor is there, at least.

Hopefully this gets better, because I’m already past my Steam refund window.

Comments Off on EA Impressions: SPAZ 2

Sometimes I find myself inexplicably drawn to building spaceships and watching them explode. With Steam having a 75% sale on the Gratuitous Space Battles DLC this past weekend, it seemed as good a time as any to try and get that fix.

The problem is that I am having a hard time convincing myself that the game isn’t complete bullshit.

You can read my original review here, but suffice it to say, GSB is essentially a game about building spaceships and nothing else. I think one of the DLCs or patches gave you the ability to change orders mid-battle at the cost of high score tracking or whatever, but under normal circumstances you design ships, give general orders, and let’em go. I mentioned in the review that I quickly came across a strategy that essentially wins 100% of the time – basically missile spam with occasional target painter that makes missile 100% accurate – but it seems clear to me now that it has been nerfed to oblivion. Anti-missile tech existed in the vanilla game already, e.g. guidance scramblers and Point Defense batteries, although it seems much, much stronger than it ever was so many months ago.

It is fine having counters to things, whatever. When I was looking at alternatives to missile spam though, I kept running into problems with the ship building aspects. As you might imagine in these sort of games, you have to juggle each component’s energy usage, crew requirements, weight, and so on. Except… all roads lead to the same max-level components and heavy mixing of weapons. It feels… banal. If I want an all-beam ship, let me build an all-beam ship without gimping on shields or armor. The weakness of specialization is supposed to be being vulnerable to counters, not it being nigh-impossible to actually specialize.

Or maybe I’m just all sour grapes because this happened:

Was totally wiped out, killing zero enemy ships. They all had ~20% HP or less.

I will continue plugging along with Gratuitous Space Battles for a while longer, but in the meantime, if you have any suggestions for spaceship designing/battle games, let me know in the comments below. I was obsessed with an ancient game called Stars! back in the day, and spent 40+ hours most recently on Space, Pirates and Zombies; dunno if FTL really counts, but I spent a lot of time with that one too. It can be a 4-X game, it can be FPS, it can be whatever it is, as long as it has a ship-designing component. And, preferably, no bullshit.

It just can’t be EVE. I have little interest in experimenting resulting in the destruction of weeks of game time. 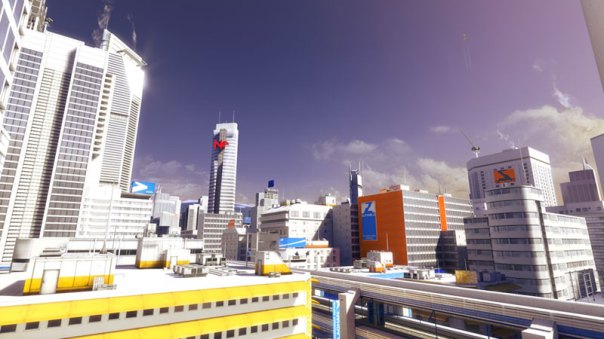 More of this, please

I had somehow missed most of the other reviews out there regarding Mirror’s Edge, so when I booted the game up I was a blank canvas upon which the designers could paint a visually-striking first-person platformer that worked (far better than others, anyway). And while I have seen those other reviews in the time after having completed this game, their legitimate criticisms does not change my mind regarding badly wanting Mirror’s Edge 2.

It is difficult to say much more than “first-person platformer” because that pretty much sums up Mirror’s gameplay. You control a Runner named Faith, as she delivers packages and unravels a conspiracy in the unnamed City sometime in the (not so distant?) future. Most of your time is leaping from rooftop to rooftop, vaulting over AC units, scrambling over fences, busting down doors, shimmying up or down pipes, and basically making a circuitous path from Red Point A to Red Point B. Pretty soon, helicopter gunships and trigger-happy police officers are firing on you as you maintain an addicting sort of manic momentum and leaps of faith. Perhaps ironically, I felt more like a ninja in Mirror’s Edge than I ever did in Assassin’s Creed, despite this game being more realistic in terms of your ability to take falls and so on.

Unfortunately, the reviews are correct in criticizing the game’s split personality when it comes to combat. While you have the choice early on to simply run around the police you encounter, by mid-game you are frequently required to take on armed guards with your relatively ineffectual unarmed attacks. There is a disarming method that will take out a guard in a single button press, but the timing is so ludicrously short – even with your recharging slow-mo ability – that most times you are better off flailing at the guards until you or they go down. Once the first guy drops, you can pick up his gun and take out the others with however many bullets are left in the clip.

Ultimately though, when Mirror’s Edge is good, it’s great. Much like Portal 2, you will end up surprising yourself with the solution of “how the hell am I going to get over there?” – and managing to get a few stages correct the first time left me with a metaphorical runner’s high. Other times you will get stuck, shot, or take a flying leap off a building only to realize that wasn’t what the game wanted you to do. If you can accept the (minor) frustrations as the price of admission though, I highly recommend checking out the show.

Originally, I pooh-poohed SPAZ based on the demo not being not particularly impressive. Having acquired the full game as part of an indie game deal, I decided to give the game proper another shot. And what I discovered, 38 hours later, is both a deeper, more impressive game… and one sorely in need of a larger-than-two-developer crew.

The basic structure of the game is destroying other spaceships, reverse-engineering their designs so you can build them, collecting Rez to build said spaceships, and basically having around seven different missions to destroy said spaceships. In many ways, SPAZ is sort of like Gratuitous Space Battles aside from being able to control the ships flying around. The underlying problem with the setup though, doesn’t creep up until around hour 10-15: pacing.

The early game is extremely exciting with each new encounter resulting in new ships to pilot, there being many new components/weapons to try out, and so on. Unfortunately, the game becomes considerably less fun when you are piloting the same exact ship you were dozens of hours ago. Then, when you finally get towards the endgame and unlock those capital ship designs, the game’s difficulty evaporates as you steamroll them with a clearly overpowered design. I defeated the last boss in literally 20 seconds of holding the left mouse button down while stationary.

Overall, it’s tough to be too critical though, especially considering the game held my attention for 38 hours. There is a lot to like about the things SPAZ accomplishes well, and rather than being disappointed with some of its failings, I simply wish MinMax Games had the additional resources to polish up on its potential.