I completed Far Cry 5 a few days ago.

The visuals are quite amazing.

Mechanically, this is the best Far Cry in the series. The gunplay is smooth and tight, weapons are reasonably varied, and vehicles are generally fun to drive. Many of the more rote Far Cry-isms have also been removed. You are no longer forced to climb towers to explore the landscape, nor hunt down sharks to craft a bigger wallet. The whole map is available to explore right away. Screen clutter is practically non-existent, and what quest markers exist are fairly subtle.

Narratively, I feel it is one of the weakest in the series.

That dog ends up being a very Good Boy.

I have no problem with the Christian iconography, the political parallels to present day, the rehashing of Spec Ops: The Line-esque navel-gazing about who the real demon is (hint: it’s you), or the sometimes absurdly comical cruelty. A lot of that is part and parcel to the Far Cry series. What is fairly new is the simple fact that the player is kidnapped NINE TIMES over the course of the story. The purpose is obviously to engineer a scenario in which the player can interact with the cult lieutenants and witness some exposition first-hand. The frequency though, and the ham-handedness, obliterates any semblance of story cohesion.

Seriously, one time I completed a mission, got the “You’re Being Hunted” message, and was apparently taken out by a blowdart… while piloting an attack helicopter hundreds of feet in the air. Cue cutscene and sub-boss taunting, in which it was revealed I had been imprisoned for seven days (!?!) undergoing psychological torture and starvation. Then (spoilers) I broke out of prison for what had been the fifth time at this point, and went back to what I had been doing originally. 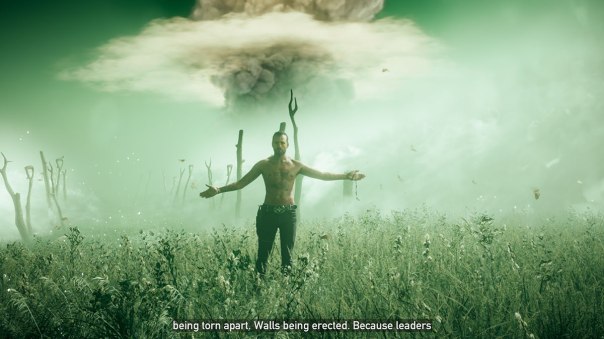 I think the principle problem is that Ubisoft simply cannot outrun the shadow of Far Cry 3. That game had an insufferable trust fund frat boy as a protagonist, but it also had a narrative arc with some progression, substance, and you know, a main character that talks. With the lack of any sort of internal dialog, the devs leaned real hard on Vaas wannabes and contrived capture scenarios. Hell, the main character might have been captured just as many times as in Far Cry 3, but it never felt this arbitrary before.

In any case, after 15 hours, that’s that. Far Cry 5 has good gameplay and a stunningly beautiful open world playground to blow up stuff in. But… so do a lot of other games these days. What sets the series apart isn’t the open world or general shenanigans, it’s the story and general narrative experience. And that’s unfortunately lacking this time around.

The deals, they have begun. My own shopping list:

Just to be clear, I’m not buying all these games. The ones with a green checkmark? Yes. Red circles are not good enough of a discount to purchase, and the question marks are, of course, question marks. This entire exercise is kind of superfluous given how I am still trucking through Fallout 4 (70+ hours), but hey, the less of a gap between mainlining high-quality entertainment, the better.

I may or may not update this post with additional deals as they catch my eye.

Edit: Life is Strange is $10 on the Square-Enix website.

Edit2: Apparently Far Cry 4 sale on Ubisoft went away. Amazon has Gold version up though.