For some reason, I am definitely getting more of a Singularity vibe than necessarily a Bioshock vibe. It might simply be I am beyond the saturation phase of Unreal engine games:

Is this… better or worse than Half-Life 2? I can’t tell anymore.

I got about 3-4 hours of gameplay in yesterday evening, and am a bit past the point where you can start picking up various powers. Blink is pretty cool, although I was initially let down by my inability to Blink through objects. The other power I purchased was a sort of Life-sense ability that I am inclined to believe is stupid-OP. In fact, I feel pretty OP from the get-go, to be honest. In games like Deus Ex: HR, the downside to “stealth” kills were that they weren’t actually stealthy at all. That is not a problem in Dishonored: enemies are stabbed through the neck and die in under 3 seconds, perfectly silent (as far as I can tell).

In fact, given Blink, the Life-sense skill, instant stealth kills, and the verticalness of the beginning areas thus far, Dishonored feels more like a first-person Tenchu game than anything else. That comparison really hit home when I finished the first area and saw this screen:

I don’t remember sucking that bad during the level.

The Tenchu series is one of my favorite of all time, so it is not a bad analogy.

The main problem I have at such an early stage is the notion that we have another seemingly binary Bioshock situation between good/evil. As in, there are apparently two different endings, and if you go only halfway, you might be stuck with the “evil” one. Which is fine… in a game where it feels more like a legitimate choice. Bioshock, for example, just asked you not to kill the Little Sisters; DE:HR had scores of nonlethal maneuvers and/or weapons, and I think the nonlethal option was the default takedown when you pressed the button. Conversely, Dishonored has your sword attack bound to left-click, and you need to hold down the Ctrl button for a few seconds to knock someone out instead.

It’s fine for the pacifist play-style to be more challenging upfront. A brand new game just loses some of its luster when I am immediately confronted with a screen like this: 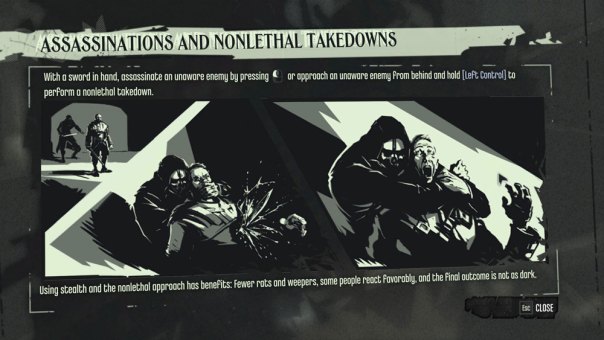 But… but… killing is so fuuuuun~

Killing is quick, easy, and fun in Dishonored. Dropping down from a 3-story building onto one guard, Blinking behind another with blade flashing, and taking out a third with a crossbow bolt before the first guy stops bleeding feels like I’m playing Ninja Assassin: the Game. It seems a bit too easy at times, but I imagine that is the point when I am on the first real mission and playing on Normal (there are two higher difficulties); later levels are probably more intricate. Tenchu was mainly as difficult as it was when you cared about getting Grandmaster, at least before those ridiculous “one alarm = failure” missions.

That said, I might start over before going further. If I go the nonlethal route, I should probably go all the way. And if I am going to kill ALL the things, I am probably going to need to bump the difficulty up a few notches.