For all the the derision Hearthstone might get for being coin-flips and “dumbed down” and such, sometimes you end up facing a straight-up agonizing dilemma. For example, this game from the other day: 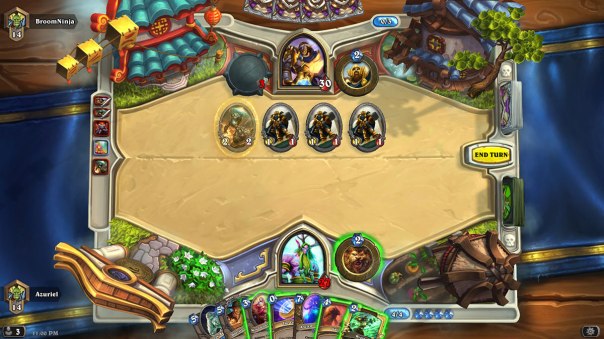 My choices were the following:

So, which one would you do? If my deck matters, it’s Ramp (Ysera) Druid without combo.

…did you pick a course of action yet?

…okay. Like I mentioned, I went with Coin + Harrison Jones. On the opponent’s turn, he cast Blessing of Might on the 2/2, turning it into a 5/2, summoned another 1/1 dude with Hero Power, and went face with everything. On my turn, I committed such an egregiously bad misplay that I’m legitimately embarrassed to type it out. What should have occurred was my Swiping the opponent’s face, destroying all his 1/1 dudes plus popping the Divine Shield, followed by trading my Harrison into the 5/2. Instead, I did that backwards. So, really, it was so bad that it was two misplays, as I could have recovered by Swiping the 5/2 directly at least. But nope.

Needless to say, I lost that game.

And actually, I probably would have lost the game regardless. The remaining sequence of the game was him casting Charge creatures and going face every time – the extra 5 damage taken unnecessarily would not have made much of a difference when you’re sitting at 5 HP to his 30. The only healing in my deck are two Ancient of Lores, and drawing those before getting Arcane Golem’d or Consecrated and such would itself be a coin-toss.

The funny thing to me is how, even in Magic: the Gathering, the best play is the one that gives you a chance to win. If you just play based on the cards in your hand and the ones on the board, you can lose sight of the Window of Victory as it slowly slides shut. If your best chance to win is to commit to a costly attack and top-deck a burn spell the next turn… then do that. If you draw something else, oh well, you were going to lose at that point anyway.

My best play for the above game would have been MC Tech and hope I get the 25% chance to nab the 2/2. Perhaps my opponent would have played different cards the following turn, but I’d have two decent minions and Swipe for the next. Or Belcher. Or Harrison. Or, at that point, dropping a 5/10 Taunt creature on turn 7, sealing the game until and unless my opponent draws into an Equality (assuming Eboladin even runs that). In this scenario, I was not avoiding the risky play that could backfire, I was making the same risky play and choosing the 0% chance to win option.

There are deeper games out there than Hearthstone. Games in which you can encounter these scenarios without the coin-flips being so naked obvious. But just because there are coin-flips, doesn’t mean there is nothing one can do to maximize their chances at success.

TL;DR: when in doubt, MC Tech.