One of the perennial WoW criticisms from certain sectors was that Wrath started strangling the goose that laid the golden eggs. “WoW grew in vanilla and TBC, stalled out in Wrath, then declined thereafter. Clearly New Blizzard with its LFD, welfare badges, etc, was at fault.” We already know the New Blizzard dichotomy is fiction, at least in terms of Wrath itself, but a recent debate with SynCaine resulted in an unexpected discovery:

Wrath gained more subs on average than during vanilla, and was on par with TBC.

Technically, this is all supposition. But just follow me for a bit. First, here is one of my older WoW graphs that I augmented from MMOData (RIP): 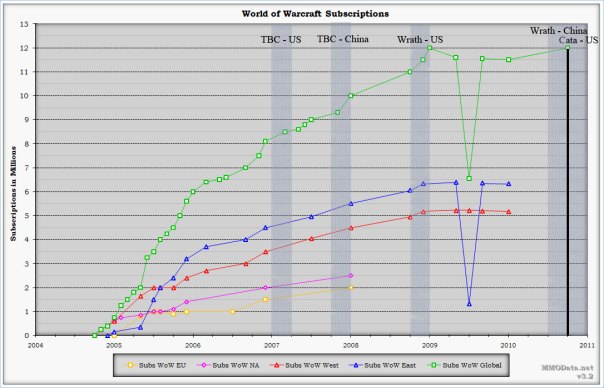 From that, we can clearly see the plateau into Wrath. The missing puzzle piece though, is something I brought up before in a different context: churn.  Churn is the natural loss of players for a myriad of reasons. Perhaps they no longer have time. Perhaps they lost their job. Perhaps they died. It doesn’t particularly matter why they left, they just do. Consistently. To the tune of roughly 5% per month for MMOs. Here are two quotes:

“Even a good game churns 5 percent of its users out every month,” says Gaffney. “That means every 20 months you’ve churned out your whole user base.” If you have one friend who still plays an MMO, that means you might have 10 friends who used to play that MMO.

In a new analyst note, Mike Hickey from Janco Partners has been examining Blizzard’s World Of Warcraft success in light of the Activision/Blizzard merger, suggesting average monthly WoW revenue in “the low teens” per user, and a churn rate as low as 4-5% per month.

That second quote is in reference to WoW circa 2007, for the record.

So now let’s go back and look at that graph with an understanding that 5% of the population leaves every month. For ease, let’s just look at WoW West, which includes the US and European subs. It remains steady at around 5.125 million from 2009-2010. Assuming a 5% churn rate, that means 256,250 new subs had to be gained every month (on average) just to keep steady.

If you want to follow the global population line instead, the figures come out as follows:

If you want to look at an MMO-Champion graph instead, here you go:

The graph is less helpful numbers-wise, but it shows the sub consistency throughout Wrath.

Now it’s entirely possible there is a better way to mathematically model this information. Hell, I may even have made a calculation error somewhere. If so, feel free to correct me. But it’s a simple fact that if WoW had a 5% churn rate through Wrath, then a “plateau” really means 575k-600k new subs a month  worldwide were gained to replace them. It’s not a small amount. And it gets even bigger if we start thinking about 6% churn or more. You know, because the expansion was so bad.

So whatever you want to say about Wrath, go ahead. Fact remains it got more new players per month than vanilla.