Although I did not mention it beforehand, I spent all of last week vacationing in Florida.

While I was gone, Hearthstone released its third expansion, Whispers of the Old Gods. As with the expansions prior, Blizzard ran a “sale” in which $50 bought you 50 packs instead of the usual $1.25/pack price. I had decided to not take advantage of this deal before the vacation, as at that time there still wasn’t a full spoiler. So I passed on the deal, which ended before I returned.

As it turns out, I really didn’t need it: 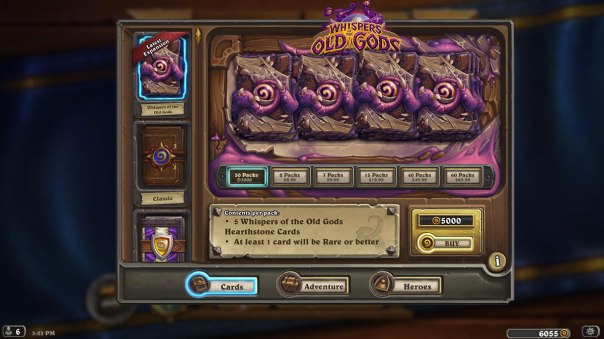 That’s a lot of eyeballs.

I ended up purchasing around 55 packs with gold alone (100g apiece), and received another 13 packs via the quests everyone gets for playing during the expansion release. And this reminded me that I had also purchased the League of Explorers expansion last November solely with gold too, for around 2800g, I believe. In fact, given my (casual) playing habits, there’s a good chance I never have to spend real dollars on Hearthstone ever again.

What playing habits? Hearthstone gives you one daily quest each day, and you can bank up to three. Most reward 40g, but the average payout is actually closer to 50g. I typically play twice a week or so, usually in Tavern Brawl mode (which also gives you a free pack once a week), for 1-2 hours each time to complete quests. If you do that consistently, as I have, that means you are banking 1200g-1400g a month just for dicking around.

You can grind more gold via wins (+100g each day) or Arena (+infinite/skill), but I like my method.

Thus, even if Blizzard releases two expansions and an Adventure each year as they plan to, I can afford to purchase the Adventure and 58 packs of each expansion via in-game gold playing just twice a week and completing 6 quests. Will that give me all the uber-cards necessary to be competitive in the Standard format? Well… depends on the deck. If you aren’t above playing Aggro, it’s entirely possible to hit Legend on a budget, just as it’s always been. Wallet Warrior? Not so much.

Having said all that, I’ve both been playing Hearthstone for a while and dropped some cash for packs early on. I have all the staple Legendary cards from the base set, at least for the classes that I routinely play. There are some clever catch-up mechanisms in place (Tavern Brawl pack, end of month rewards), but I don’t want to give the impression that Hearthstone is a pleasant experience for the die-hard F2P player. In fact, I imagine it sucks, perhaps more than ever.

However. Now that I’m all set up? I’m good to go. And even if there were some chase Legendary that I really felt I needed – there doesn’t seem to be an obvious Doctor Boom this time around – I accumulate a minimum (e.g. worst-case) of ~300 dust a month from free packs/rewards, or 540 dust each month on average, meaning I can craft whatever Legendary I wanted every 3 months. That’s a long time, granted. But sometimes you pull the cards you need, and it doesn’t count dusting unused cards from your collection.

So, really, I consider Hearthstone to be a P2Setup game these days rather than straight-up P2W. If you’re considering playing for the first time today though… well, good luck. If you enjoy the overall gameplay, it does get better over time. It will just be you or your wallet that endures the hazing.

Posted on May 2, 2016, in Hearthstone and tagged Expansion, F2P, P2Setup, P2W, Whispers of the Old Gods. Bookmark the permalink. 11 Comments.