I am hoping things get better than this.

Granted, I do not consider myself “in the game” quite yet; given how prominently Elizabeth displayed, I’m guessing everything up to her will still be considered tutorial. Of that tutorial though, some things are becoming more and more clear to me:

1) Fantastic visuals have the opposite effect on me.

The visuals, objectively, look awesome. The visuals are also immensely distracting. When I am trying to shoot a guy with a pistol, seeing a particularly well-done cumulus cloud in the background adds nothing positive to that gameplay experience. I had the same issue with Battlefield 3 in the beginning – it was difficult to “see” enemies amidst the Ultra-High settings – so this is something likely to get better over time, e.g. when I start tuning out the visuals.

Just gotta ignore all of this.

Incidentally, I never had this problem with Borderlands 2, and I think that is because the moments of cel-shaded beauty are more spaced out, and act as breaks inbetween more functional battlefield back-drops. I don’t want ugly games, of course, just games where you are not overloaded with visuals at time when precision and quick reflexes are called for.

2) Thus far, the theme isn’t all that compelling.

In the original Bioshock, the theme was taking Libertarianism to its extreme conclusion – a gaming subject matter particular novel for its time. Bioshock 2 introduced the opposite, showcasing the nefarious side of Collectivism. While it is still early yet, Bioshock Infinite’s theme of religious extremism slash Isolationism slash historical fetishism is… somewhat rote in comparison.

Bigoted religious cults in videogames are right up there with zombies, Nazis, and demons when it comes to stereotypical bad guys. This might be the first time we have seen such (intentional) overt racist imagery in a game, but I feel like I can already plot the rest of the story from here. There is still plenty room for surprises… yet Bioshock Infinite is going to have to surprise me, lest its thematic message be no different than the one you have seen dozens of times in the 32-bit era, or watching Glenn Beck for more than ten minutes.

Also… aside from some nice clouds and sunsets, so far the underwater motif of the original Bioshocks feels worlds better than open sky of Infinite. There was implicit danger at all times in the ocean, along with a sort of fantastic plausibility; underwater buildings are more impractical/expensive versus impossible. Conversely, in Infinite, sometimes it is not especially noticeable that you are in the air at all. Just look at that screenshot up there again.

The very first sign a game is a console port is when it is Checkpoint-based. My dismay at discovering there was no Quick-Save was both immediate and visceral. Technically Borderlands 2 is also Checkpoint-based, but the difference is that A) those Checkpoints are a known quantity (you know where they are), and B) you can still save at any time when you Exit the game. 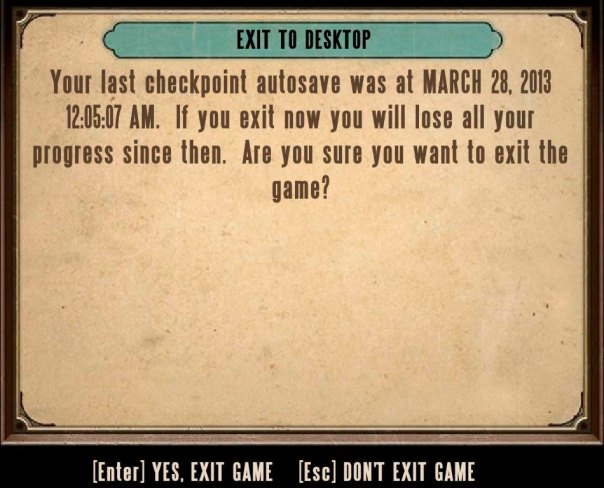 I am going to trooper on, of course, and perhaps it is a little unfair of me to expect brilliance from Minute 1. But given that I broke my Day 1 Embargo for Bioshock Infinite, I am a little bit weary of Buyer’s Remorse. I mean, I passed on Far Cry 3 for $30 for god’s sake!

Here is to hoping that I get blown away in the game proper, instead of musing as to whether I might have more fun playing Recettear like I was two days ago.

I usually do not participate in theme weeks, but Stubborn’s recent Individualist vs Collectivist post struck a chord. A discordant one.

But first, as always, we have to define the terms of the debate. Throughout Stubborn’s post, for example, he seems to be using “grouping” as interchangeable with Collectivism. While grouping is certainly something Collectivists do, that is like calling me a Landscape Artist when I mow the lawn. The intention matters.

But rather than get too philosophical about it, I have an easy quiz you can take to determine whether you are a Collectivist, or at least have Collectivist tendencies. Have you ever felt:

…to do or refrain from doing some action in an MMO? If you answered “yes,” congratulations comrade, you are a Collectivist!

I knew the precise moment my WoW days became numbered: six weeks after having killed the Lich King in ICC. There I was, logging on at 9pm sharp, trying to drum up support for yet another ICC run that I did not want participate in, let alone tank and raid lead. So why did I do it? Because I knew that 4-5 of my guild mates wanted to do it, that if I did not personally pull the group together the raid would not form, and that each raid which failed to form would drive said guild mates further and further away (into other guilds, or simply away period). Collectivism is about putting the needs of the Collective ahead of your own. You sacrifice your own enjoyment for the benefit of the whole, because the guild/group/corp/etc is intrinsically linked to your own enjoyment.

Contrast the above with Stubborn’s assertion that Diablo 3 ranks highly on the (arbitrary) Collectivist scale:

D3 gets the most collectivist score because it has no add-ons, heavily emphasizes grouping at harder difficulties, and has individual loot.  I’d give it a 5, but I have hopes for more collectivist MMOs to come around, and besides, it stinks.

Do you care about the other people you group with in Diablo 3 beyond their potential function as loot efficiency creators? Do you feel guilt for leaving such a group, or a sense of obligation to stay, or shame when you “fail” them? Probably not.

But… maybe you do. In which case, this debate becomes even more abstract as we are awkwardly forced into quantifying how much a game may or may not encourage Collectivist tendencies in players. Is the game anti-Collectivist, or are the players simply pro-Individualists (read: rational entertainment consumers)?

Here is how I see it: Collectivism is something you bring into the game from the outside.

A game can force you to group with other people in order to play, but whether you identify with that group is 100% up to you. Everyone readily agrees that WoW’s random LFD groups are five individuals looking for loot, but Trade Chat groups were not the opposite by default. Did I have a higher tolerance for failure back in TBC? Yes… because if I did not carry that terrible player through heroic Shadow Labs, it meant I was playing zero dungeons tonight. Walking that player through detailed text explanations of each boss encounter was necessary like wearing a shield and pressing Consecration was necessary – in both cases I was simply pressing buttons, not connecting to another human being.

Perhaps I should just quote Samus, who needs nominated for Best Metaphor of the Year:

Any social element is IN SPITE OF the design of these games. You are sitting in a room with all the chairs facing the wall, praising the room for the great conversation you still managed to have.

Having said all that, I can still agree with Syl vis-a-vis being glad that MMOs like Guild Wars 2 are moving towards “bonus instead of malus” incentives for grouping. If I wanted to be social (the most important step!), many MMOs would make being social difficult; simple things like penalizing group XP, throwing quest barriers up, and placing people in awkward Mineral Rights scenarios (“You take the Copper node.” “No, you!”). These days, I would also include general looting rights, even in raiding. While loot system is traditionally the backbone of a raiding guild’s identity – Loot Council vs DKP vs Main spec > Off spec rolls, etc – it can also be divisive. I might like playing with Bob, but if he is in a guild with Loot Council… well, we can no longer raid together.

Ironically, in a certain light, relaxing these grouping barriers actually seems to make games more Individualistic. And it does. Everyone says LFD is the most Individualistic, community-destroying feature ever… and then praise GW2’s auto-grouping, auto-scaling, individual looting, no-words-necessary Dynamic Events in the same breath¹. And the multiple guilds thing, which is great, but sort of undermines the whole guild loyalty/identity thing though, right? Maybe, maybe not.

I feel like this is one of those rare situations in which the otherwise terrible relationship cliche of “set the bird free, and if it comes back, it was meant to be” is applicable. After all, even a sociopath can fake relationships long enough to get the loot, so to speak. A Collectivist cares about the Collective, and will return even if they are not penalized for leaving. A closet Individualist on the other hand… well, they need the handcuffs in spite of themselves.

Of course, the thoroughly legitimate fear is that there ain’t that many Collectivists after all. And I am inclined to agree. So it is simply up to you to decide whether or not the chance of fake becoming real via going through the motions is worth all the cognitive dissonance and hand-waving.

I say open up that cage and let’s see what happens.

¹ LFD might be worse for basically never grouping the same people together again, but simply seeing the same few dudes in Events multiple times is not all that more social by itself. It is the difference between paying for gas at the pump and paying the cashier inside.