As I settle into the routine of daily play, I just wanted to take a moment and express how amazing the mounts are in GW2.

To be clear, I have only unlocked the Raptor mount at this time. My understanding is that the other mounts behave quite differently, and all have different abilities that they bring to the table. For example, the raptor can leap long distances, whereas some other mounts float above water, others leap vertically up, and there is even one that can fly/swoop around.

Looking just at the Raptor though, GW2 demonstrates a refreshing sense of design that works especially well in its gamespace. The Raptor has momentum and a turning radius. At first, this makes it seem unwieldy and difficult to maneuver. But then I started to ponder why it “feels” like anything at all. The answer is because in other MMOs like WoW, mounts are just reskinned players models. If you have ever flown around in WoW when the mount model fails to render, you can see your character in a swimming animation in open air. That is basically what mounts, flying or otherwise, are in WoW. They aren’t anything. 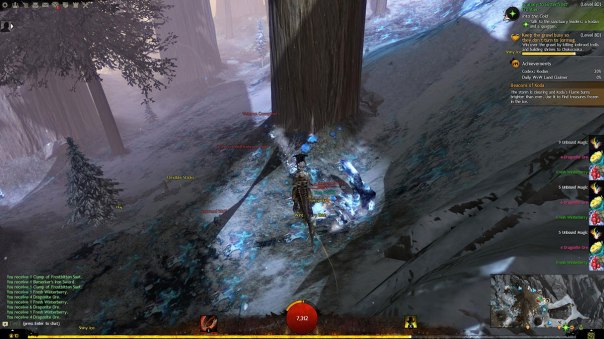 The Raptor’s primary movement ability is the Leap, and here again the subtle genius of GW2’s design shines through. The length of the leap is a function of how long you press Spacebar, and the amount of times you can leap is tied to the “Endurance Bar” aka the Dodge bar. In text form, those are merely details. Running along the strikingly three-dimension space GW2 constructs, the mere act of riding the Raptor is great fun. Intermittent leaps, large leaps, traversing canyons simply to see if you can… all of them provide stimulation in a way simply going from Point A to Point B never do. Presumably there are entire maps in Path of Fire constructed to take advantage of these movement capabilities, but the default maps are just as fun.

And did I mention that mounting up is instant? For those that experienced it, the Halloween holiday in WoW (and Druids, I suppose) are the closest we have gotten to instant mounting, and the devs seem ever resistant to changing that, as if the 1.5 second delay is some integral part of the questing experience. Well… given the radical difference in feel between zero and any other number, perhaps they are right. But instant is fun. Now that the last vestiges of non-consensual PvP are gone, perhaps the WoW devs can take a page out of GW2’s playbook on the matter.

In any case, the mount system in GW2 is the best I have played in any MMO. I think Aion might have came close, if you consider wings to be “mounts,” but this definitely takes the cake.

Oh man, Guild Wars 2. If ever I’ve had an on-again, off-again relationship with an MMO, this would be it. My first reloaded post was in January of 2016, and the time before that was back in 2012. It’s now January of 2018, so about as good a time as any to get started again.

Once I purchased Heart of Thorns for $15, I was immediately faced with a dilemma. My dilemma was thus: I had an Elementalist at level 80 and an Necromancer at level ~45. The Elementalist had been my “main” back in 2012, but I became increasingly annoyed with its mechanics and penchant for immediately dying at every available opportunity. At the same time, all my alts were dozens of levels behind, and I had little desire to grind my way through the same zones, so I stuck with a class I didn’t like. Eventually, I said Screw This and leveled the Elementalist the rest of the way to 80 via crafting professions and called it a day.

Now that I was back, it made much more sense to actually play a class I enjoy (for now), e.g. the Necromancer. However, that presents its own challenges. I technically had enough Tomes of Knowledge (+1 free level) to instantly get the Necro close to the cap, and enough gold to get the rest of the way via crafting. But was that what I really wanted to do? Immediately get to the zero-progression endgame? It would seem to make more sense to just level the Necro normally and derive what enjoyment I could from the everyday GW2 experience.

Which is what I did, for a while. I gained about 2-3 three levels from Events and Story quests.

The problem is three-fold. First, at some point ArenaNet changed Daily Quests to all but force you to complete expansion content to complete them. Before, you could slum around starter zones, blow through a few Events, gather some nodes, and then you were done. That may or may not have been before they started giving you straight-up 2 gold for finishing the Daily, I don’t know. But if I wanted to get a free 2g, I needed to have access to the endgame stuff ASAP. Or rely on WvW/PvP stuff, which I wasn’t going to do. So I needed my level 80 available.

The second problem was Gliders. I had the expansion, and unlocking it on one character unlocks it for everyone. Again, you need to be level 80 for that. So… why not just unlock that and be done? Seems reasonable.

The third problem was the kicker though: mounts. Every time I saw someone running around on a mount, it reminded me of how slow my character moves and how many crappy talents/abilities I have to equip in order to slum around at a bonus 33% speed. It got to the point where I no longer wanted to play the Necro at all because, in my mind, the worst case scenario was the expansion not going on sale by the time I hit the endgame, thus ensuring I had a lame experience for months and still bought the “full” price expansion later.

So… I went ahead and bought Path of Fire, and immediately unlocked the Raptor mount.

I say “immediately” but that certainly did not feel the case. I died about half a dozen times on “normal” mobs in the initial story quest, and at least half a dozen more on the “bosses” at the conclusion. If the Veteran Flame Dogs’ health actually reset after each death, it’s entirely possible I would have never completed the scenario. I know that I was a bit rusty on the Elementalist, and I did not have full Exotics in every slot, but I was at level 80 and had level 80 gear everywhere, and knew how to avoid the red circles, and goddamn who were these mobs designed for?

As it turns out, this was just the beginning.

Ever get the feeling that things are going too good? That there is no way your luck is that amazing, and thus you are inevitably due for some bad times? I am not normally this way, but… well: 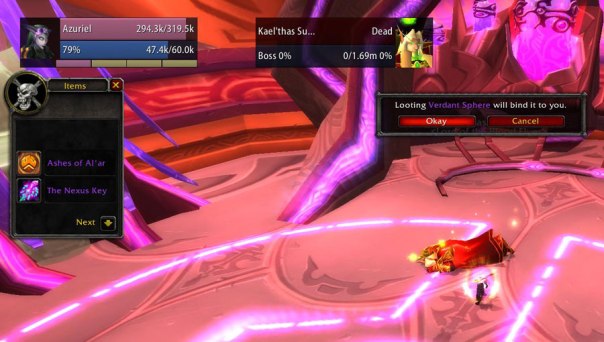 I have killed Kael exactly one time before last night, back when Wrath first came out. I was not even going to go to Tempest Keep originally; after clearing Black Temple out solo for some transmog items, I decided that Alar’s axe and Kael’s sword might look interesting. As I was swimming around during the gravity phase, I thought to myself how funny it would be if the Ashes dropped. And it did. And I am finding it more frightening than funny.

The only other two mounts in WoW I have ever wanted are the Reins of the Raven Lord and the Ultramarine Bug mount from Archeology. Based on my luck thus far, I should probably start running heroic Sethekk Halls and doing some more Arch before I get struck by lightning meteor shark bees.