If I had to pinpoint the exact moment when my home theater plans started falling apart, it was when I decided not to get a home theater. I still don’t want one, for the record, but I’m currently in that sort of purgatory where doing something and not doing something are both equally bad. Since I cannot go back in time, I will have to settle for dispensing vicarious wisdom.

Originally, I bought a 32″ TV and a PS3 for my console needs. That was fine at the time, as I was living with a roommate and thus had the TV in my bedroom. Then, of course, I decided I needed to get some kind of soundbar because TV speakers are universally terrible. This setup worked for about a year and a half, until I ended up getting a new apartment by myself. At that point, a 32″ TV just starts looking comically small from 9 feet away. So… new TV.

Price-wise, the 42″ TVs I was looking at were the same price as projectors. I decided to go with the projector because A) why not?, and B) poor long-term planning. I’m not saying that I regret the purchase per se, but it definitely set me down a path that I had not fully anticipated.

So I had the projector and the soundbar. I was not all that happy with the soundbar though, because its volume settings were such that Volume 4 was a bit too quiet to hear, and Volume 5 was too loud. Now that I had a projector, surely it would be as good a time as any to pick up a set of 5.1 surround sound speakers, yeah? No, past self. The answer is no. Unfortunately, I was not quantumly entangled at that point and ended up buying this particular set of speakers for a sum that was probably around $100.

It was not until this point that I realized I had made a mistake like six moves ago.

See, home theaters are like building a computer – you can’t just randomly buy the shit you need (motherboard, CPU, etc) and expect the disparate parts to just come together somehow. For example, let’s take a look at the back of my projector and speakers for a second: 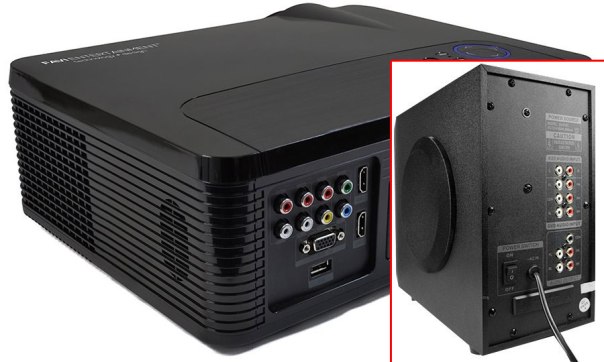 There are a lot of things wrong with this picture. A lot of embarrassing, quite-obvious-in-retrospect things. Things like “how the hell are these two things supposed to connect?” The answer is two audio-out cables from the projector. So I have HDMI quality picture and sound coming from the PS3 to the projector, which then downgrades the picture to 720p and reduces the sound to 2-channels, aka stereo. That… sucks. What’s worse is that I’m not even sure these speakers were better than the soundbar, because most times its either too quiet or shaking the walls, and while I have reduced the amount of neighbors I have with my recent move, I remain in an apartment.

A “solution” to this problem is precisely the thing that you’re supposed to buy with any 5.1 speaker setup: a receiver. Which, despite a rather exhaustive amount of research, is a device I have a hard time believing needs to exist as a discreet product. Near as I can tell, a receiver is a $200+ ugly box that takes the already-5.1 sound from your main device and “translates” it into 5.1 sound for your speakers. Why the device needs a receiver to exist, or why speakers can’t just play the sound, I have no idea.

So this is the dilemma I now face. It’s dumb to have 5.1 speakers playing stereo. Spending $200 on a receiver though, is also pretty dumb since I don’t necessarily care about true surround sound. And even if I do get a receiver, it’s also kinda dumb to spend that money to pump surround sound through my  speakers. That’s like wearing $200 dress shoes with sweatpants. But my current setup is not particularly good by itself; it works, it’s passable, and it also contributes to my lack of desire to play console games. I’m tempted to just buy a better quality soundbar and call it a day, but that leaves me with a set of useless speakers. There’s also the problem that I’m using a projector, which means the soundbar either needs quasi-receiver-like powers so I can run my PS3 signal through it, or I suppose it can run on the two stereo cables. Would the optical speaker jack in the back of the PS3 work too? I have no idea.

On the one hand, I have to be mindful of the Sunk Cost Fallacy here. If a soundbar would solve my problems, the speakers will just need to go back into a box in the closet. A receiver would also solve my problems though, and presumably be more modular/useful in the future home theater experiments. And, just throwing this out there, buying a regular (40+”) TV and soundbar would solve even more problems still. The projector is cool and all, but it’s one of those things I’m starting to realize that you can’t (or shouldn’t, at least) just half-ass.

Well, there you go. Learn from my mistakes. 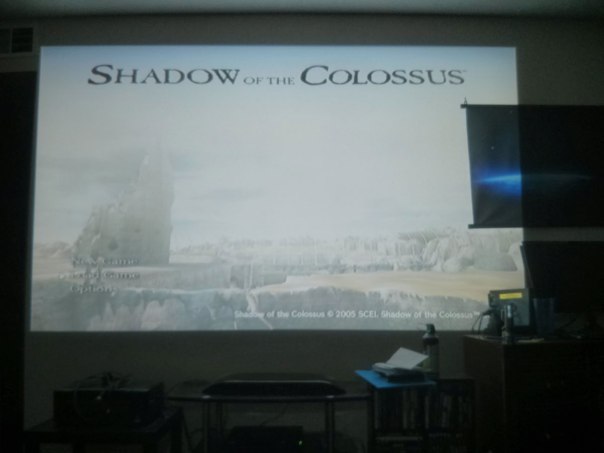 I took the above picture in HDR mode, which is why the screen seems a bit washed out and you can see the rest of my room. Indeed, as you can probably tell, I have yet to properly prepare the space. Once the remaining items filter in from Amazon, I’ll do a full write-up on my setup in the off-chance someone else wants to avoid doing the weeks of superfluous research I endured.

For the record though, the projector is a Favi HD-LED-4T, which I bought new off of eBay for $230.

And that’s an 8-foot diagonal screen.

About two weeks ago, I came to the conclusion that my 32″ TV just isn’t cutting it anymore. That almost seems laughably small these days, but it worked just fine back when I had it in the corner of the bedroom. Now that it’s ten feet away from the couch in the living room? Not so much.

I have no need for for 50″+ monstrosity, but some sort of upgrade seems appropriate. After poking around and seeing as how I could conceivably get a 42″ for $280, I started wondering “isn’t that about the price for a projector?” Yes, yes it is.

And thus began a descent into the madness that is projector shopping.

The basic gist is that you have to be absurdly careful. If you go to Amazon and just type in “projector 1080p,” all the projectors will show up. That is because A) they’re liars and thieves, and B) Amazon and most other sites are complicit with the deception. See, they’re “compatible” with 1080p signal, even though the projector will downscale your Blu-ray to its native 640×480 resolution. If you’re reading this on a PC, right-click on the Desktop and go to your resolution options and switch to… hell, my monitor doesn’t even go below 800×600. Nevermind. Point being, not only is that a resolution from a decade ago, it will also letterbox pretty much any media you would ever play through it.

The other end of the spectrum is legit, native 1080p projectors. Which will cost about $600+ on sale.

I’ll be honest here: I have spent entirely too much time looking at projectors in lieu of, you know, playing videogames. So here is what I’ve got, data-wise:

The first thing to note is that top item: it is an example of a tricky Best Buy “deal.” Marked down by nearly $250, everything looks good… up until you realize that it is not native 720p. You might also note how all the other projectors I have listed there have LED bulbs which should last well past 6 years, assuming you run the thing 8 hours every day all year around.

Still, everything feels like a minefield. How loud are the fans? How vibrant are the colors? Why doesn’t anyone list their goddamn throw ratios or the fact they have (or likely don’t have) zoom features? How does 500 ANSI lumen stack up to 2800 bullshit lumen? It’s a mess. How am I supposed to min-max this?!

So once again, dear reader(s), I am open to advice. I’m working with a 12-foot space that’s extremely light-controlled. I’m really just looking for something I can stick on a shelf behind the couch and hit that ~81″ of bare wall next to my computer. If I move my furniture around, I could probably get a little bigger projector space going. I’d love to hit the $300 price-point; if it’s anywhere close to $400, it better be far and away better than the ones I’m already looking at. Not looking to become a home theater enthusiast, I just want a bigger screen.