The open beta just came out, so you can go play it for yourself. It’s roughly a 12GB download, and I regretted it almost immediately.

You will note that I am not saying that the one specific map is hot garbage, even though it is. No, I am talking about the entire Battlefield experience. We have known from previews and the like that DICE was radically changing the mechanics, but it wasn’t until I actually sat down and played it that I realized how terrible they all were.

Ammo is severely limited. You have two, maybe three clips of ammo. See some figures running around in the distance? Shoot at them for a few seconds, reload, and… oh, hey, you have 30 bullets left. This change was supposed to make the Support class more useful, I think, but the reality is that no one is Support because you die instantly and can’t shoot anyone as Support.

Oh, and by the way, as Support you have infinite respawning ammo pouches to give other people, but you cannot resupply yourself. I ran around for five solid minutes with 15 bullets left in my mag, throwing ammo pouches left and right. I could only toss them when aiming directly at teammates – no throwing them at your feet and getting ammo yourself. I suppose they assume there will be two Support classes resupplying each other? This may or may not be alleviated once you unlock the actual Ammo Crate, but I have no idea.

Health is severely limited. While you start with 100 HP, there are breakpoints at which you cannot auto-heal past. In other words, if you get shot down to 10 HP, you will automatically regain HP up to like 65 HP or whatever. To heal yourself further than that, you need a Medic. In isolation, this is a change I’m kinda in favor of. It’s frustrating getting a few good shots into a target, only to have them hide and come back out at full health. But it’s a problem when…

Time-to-Kill is 0.00000001. Okay, that’s a bit exaggerated, but for the most part you will be dead before you realize that you are getting shot. In the case that you aren’t immediately killed from random gunfire, hiding will cause you to only heal up to 1/3 or half health, beyond which you will be instantly killed by any sniper tagging you in the foot.

All of the above combines into a bitter, shit stew of disappointment.

Spawn in somewhere. Run around, get shot a few times, now you’re at 10 HP. You heal up as best you can, but now you’ll be one-shot by any sniper in the area. Or maybe you kill a dude before getting shot yourself. You’re in a good position on the field, but… you only have 20 bullets left. Well, you may as well charge into the building and hope for the best, right? Kill a dude, go down yourself, then miraculously get revived by a medic. Except now you just have your pistol, and you get killed by the enemy as they retake the site.

I’m not entirely sure what I expected. Probably not a worse Battlefield 1, that’s for sure. But it’s hard to fully grasp how terrible this series has become, and for what possible reason. In Battlefield 2, Battlefield 3, and Battlefield 4, the game was about 64-player matches in which you did crazy-cool things with tanks and planes flying everywhere, dropping out of helicopters, and so on and so forth. Then DICE put out Hardline and it flopped. Then came Battlefield 1, which didn’t flop, but was oppressive as shit, and not at all fun to play. Now we have an even-worse set of gameplay systems, and less vehicles to boot.

It’s not hard, people. Just let us have fun shooting things. If I wanted an oppressive battlefield environment in which I had no individual agency, had to rely on teammates that failed to deliver, and was barred from doing any cool things, then… I would just go back to work. Like I do every day.

Luckily, DICE can fix these things. There’s still time to just give everyone two additional magazines, let Supports and Medics supply themselves, and bring up the TTK numbers. Now, whether DICE actually does so before launch or only after BFV sales flop, that’s up to them.

Until said changes are made though, I’m sitting this Battlefield out.

My private server escapades were interrupted this past weekend by the Overwatch beta weekend.

Unlike last time, a lot of my internet friends got in as well, so we queued up over the course of about four hours. The results were… interesting.

My first impression was one of queues. I’m not sure if it was the after-effects of the DDoS attacks or if the stress test was actually delivering stress, but queuing into matches with more than one person increased the delay significantly. At one point, our group of 5 had to wait for almost ten full minutes. Was there seriously not a single loose straggler trying to get into a game? Was Blizzard trying to match premades with premades?

Regardless, if there is one thing in particular that can kill games like this, it will be queues.

My second impression is one of… I don’t know. Difficulty? It wasn’t just about facing people who were clearly in the Closed beta portion for months. It was about teams that are not scrambled after each match, meaning if you were steamrolled in the prior one, you will face the same lineup and get steamrolled again. Unless you drop game inbetween matches and then get hit with queues again.

Then there was the Route 66 map, which is one of the worse I have ever played in a shooter. Not only is the map bad, if you get wiped on defense, attackers basically win the game instantly as it takes ages to run all the way back. [Edit: Appears that the payload speed has been decreased by 10% on this map.] In a game where you can be one-shot without much recourse, this sort of thing is bonkers.

Nepal is equally bad, now that I think about it. The game mode here is pseudo King of the Hill, where you have to capture a point by standing in it. But once captured, you continue to get points until the enemy captures it, without having to stand in the area. Which basically means you cap the point, then set up firing lines and spam the capture area with explosions, etc. It’s not impossible to recapture points and win, but the game mode never really feels all that fun. Especially one of the three maps Nepal is divided into, that has the capture point in an open area with zero cover with bottomless pits surrounding it.

So, basically, I had significantly less fun this time around with Overwatch than the previous time. It’s still fun overall, just less so. Considering my options for FPS goodness is squeezing blood from Battlefield 4 or wading into a decade of congealed veterans (CS, TF2, etc), I might end up getting Overwatch anyway. Hopefully at a discount.

FFXIV has one of the worst-feeling combat systems I have ever played. 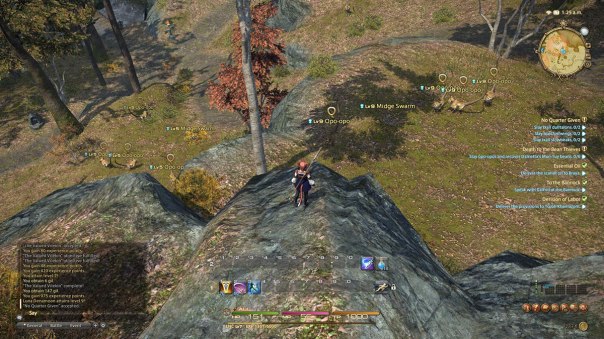 Must be some hill.

It is not just the 2.5 second global cooldown, although that is a significant factor; it is the entire early game experience. I started with Arcanist, which is probably something I shouldn’t have done to begin with, and here are the levels in which I get buttons I can use:

I thought that melee had it better, but when I rolled a Marauder, I saw that the level 2 ability was a 2-minute defensive cooldown and I instantly deleted the character. Now that I look at the rest of the Marauder ability list, I do see quite a few extra buttons to push, but I was pretty exacerbated at the time.

I did manage to get a Lancer up to level 8, and I will say that melee definitely feels better than Arcanist at least, but my Lancer was a Miqo’te so… yeah. 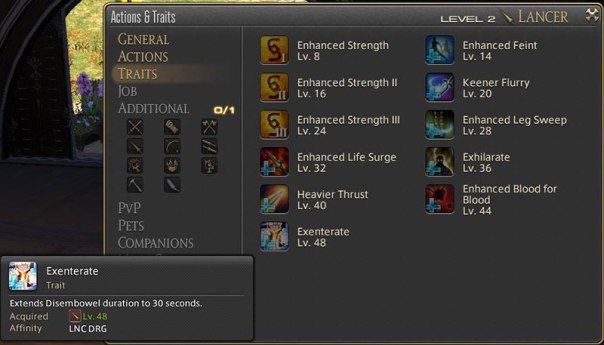 I hate when I’m disemboweled for 30 more seconds than normal.

Now, I have heard all the arguments already – something something console gamers, something something players new to MMOs. But, Christ, this is vanilla WoW paladin-level nonsense in 2016 (or 2013, whatever). Regardless of whether it ramps up to having too many buttons to push at max level, the era in which a game gets away with having a boring start is basically over.

…or not, considering how FFXIV is clearly the #2 MMORPG on the market at the moment. But still! In terms of combat, Guild Wars 2 beats FFXIV hard enough that even FFXI gets bruises, let alone in comparison to WoW. The moves look fancy, but that’s just because you have to look at something while you wait one extra second * a million goddamn times.

[Fake Edit:] After writing the above, I realized that I hadn’t actually seen the WoW beginning experience sans Heirlooms in like three expansions. So I went ahead and created a “F2P” Starter account and rolled up a Warlock, Mage, and Paladin. Conclusion? As it turns out, WoW doesn’t really give you many abilities either: 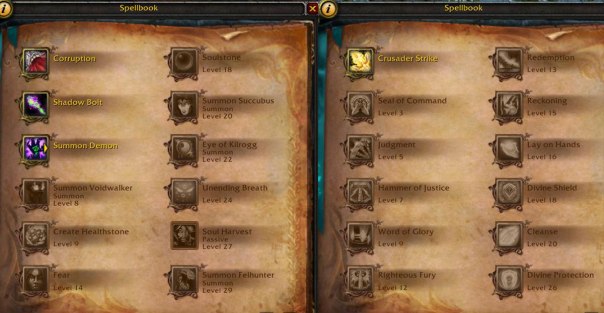 Paladin in particular looked pretty heinous, with Crusader Strike having a 4.5 second cooldown and Judgment not coming until level 5. If I’m looking at Wowhead correctly, it seems like Paladin is Crusader Strike, Judgment, Templar’s Verdict until… level 38, when Hammer of Wrath unlocks? Can that be correct? Holy fuck. I haven’t leveled a Paladin since TBC, but I’m pretty sure that was my rotation throughout all of vanilla content. At least back in the day, we had to recast Seals every time we hit Judgment!

In any case, one of the differences I noticed right away on all the WoW characters though was how utterly satisfying it was to kill mobs. The Warlock had 2.5-second Shadowbolts just like the Arcanist, but the Warlock was 1-2 shotting all the creatures in the opening areas. Hell, Corruption at level 3 was more than enough to kill them in seconds too. Try that with Bio and let me know how it goes.

So, basically, I’m sticking with what I said earlier: FFXIV has one of the worst-feeling combat systems I have ever played. And that negative feeling apparently has everything to do with the longer GCD and longer Time-to-Kill, rather than lack of abilities. Although more buttons to push would help a lot in making the combat feel less like a slog.