Where Are All the Bodies?, pt 2

Almost exactly two years ago, I asked “Where are all the bodies?” in terms of a trend of flight from MMOs. Last week, Wilhelm presented the SuperData Research group’s June report. The two slides of note are below: 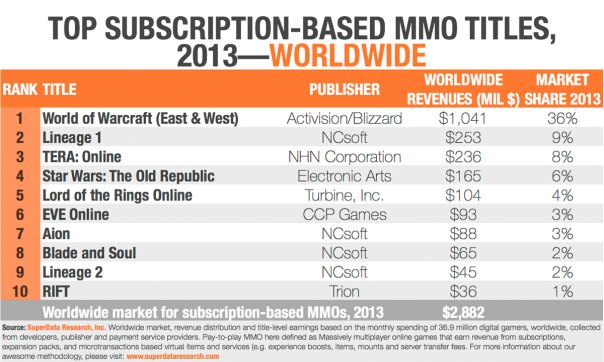 As pointed out in the comments over on TAGN, the accuracy of numbers and legitimacy of the research company itself might be in question. For one thing, neither FFXI nor FFXIV are even on that list. The absence of Guild Wars 2 makes a little sense given the criteria for inclusion (subscription option), but the others? I dunno. Perhaps they are being implied in the missing 26% of market share. Which, incidentally, covers $756 million of the total revenue on the chart.

In an attempt to compare the subscription revenue graph to the last update from MMOData.net, I got the following result: 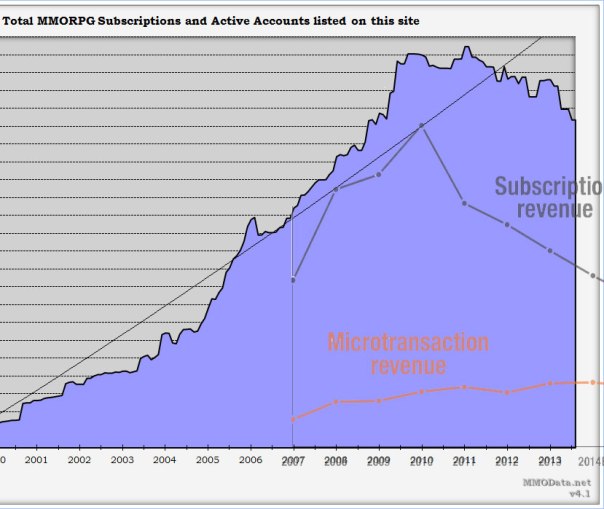 Extremely scientific, I assure you.

My methodology was to squish the one graph until the years lined up. Regardless, I have a hard time imagining the precipitous drop in subscription revenue on their chart is correlated in reality. There is a very real decline in overall MMO population – we have reached the same population levels from mid-2008 at this point – but revenue can’t be that bad. Can it?

What is sorta interesting though is in the small text below the graph, which states the data was pulled from “36.9 million digital gamers.” If you take that figure and multiply it by the market share, you get 13,284,000 as the WoW population. Of course, WoW did not have 13+ million subscribers in 2013. Discrepancy! Or is it? If you assume a 5% churn rate each month, at the end of the year you are left with 7,178,143. That is somewhat close to the estimated 7.6 million from this year. In other words, it’s entirely possible that 13+ million players played WoW at some point during the year and 6 million of them cycled out.

Accuracy aside, I think the takeaway from all this is twofold. First, the MMO market has clearly peaked and we are transitioning into a much lower (presumed) equilibrium. Second, it’s still surprising how money there is in the genre. I mean, look at SWTOR there. $165 million in revenue last year? It actually took this Forbes article to kind of shock me into the realization (emphasis added):

And what may be a surprise to many is that Star Wars: The Old Republic is actually #4 on the list, bringing in $165M in revenue last year. While much of the game went free-to-play after a disappointing debut, there’s still a subscription model that has made the MMO profitable for EA. Often SWTOR is regarded as a cautionary tale in the industry in terms of bloated budgets, over-ambition and emulating competitors, but looking at the numbers, the game has evolved into a profitable enterprise for EA, and has made even its massive budget back at this point.

I don’t even know if that is true for sure, but remember, SWTOR budget was somewhere in the neighborhood of $200 million. So… are we still allowed to call the game a “failure?” The criteria gets a little goofy when you are making ~44% more than the paragon of subscription growth¹, EVE. We can maybe say that it could/should have earned more, but (presumably) profitable businesses really speak for themselves.

As always, I believe key to success is keeping realistic expectations and budgeting around that. If you need 500,000 or 1 million subscriptions to stay afloat, maybe you should calm your shit, Icarus. The entire market is like 18 million subs, and more than a third of those are locked down in Blizzard HQ. If you can get by with 50k or 100k, you should have no problems capturing a least a portion of the 500k+ people that seem to appear on MMO release days and leave a month later. Now more than any other time, you need to start small and work your way up.

¹ Which is more historical fact than current event. As far as I’m aware, EVE has lost subs at this point like all mortal MMO endeavors.

Posted on July 22, 2014, in Commentary and tagged Subscription, SuperData Research, SWTOR, TAGN, Where Are All the Bodies?, WoW. Bookmark the permalink. 5 Comments.