First off, April Fools day is one of the dumbest “holidays” ever conceived, and I think less of anyone who participates. Remember when pinching people not wearing green on St. Patrick’s Day was a thing? Think you could get away with that kind of shit today? My earnest hope is that sometime in the future April 1st will no longer be Dead News Day, or a celebration of deception and trolling. The self-deprecating Blizzard was okay last year, but most everyone else misses the mark.

Anyway, the 31 new cards of the Blackrock Mountain Adventure for Hearthstone were revealed on Monday:

For the most part, the internet seems to be fawning over Emperor Thaurissan and Chromaggus the most, with a dash of “Fireguard Destroyer makes Shaman viable!” All of those are very good cards, mind you, and sure to see some play upon release. The problem is that none of them really do anything to stop Face Hunter¹, as pointed out in this reddit comment or this one. Face Hunter doesn’t care about your board position or how cheap your spells get, assuming you are even still alive by turn six to play those cards – taunts or healing or GG.

In a sense, it’s a bit unfair to dismiss all the enthusiastic theorycrafting with a Reductio ad Aggro as not every match is Face Hunter. However, it is an unfortunate reality that net decking requires you to entertain the possibility that you will face a much better-tuned engine of destruction. When I look at the revealed cards, the first ones I gravitate towards are the “meat & potatoes” cards like Imp Gang Boss and Hungry Dragon and even Axe Flinger. As fancy and clever as some decks can get, I find the more unassuming albeit blunt instruments like even the vanilla 4/5 Chillwind Yeti to be the most comforting. They might not win games by themselves (although they sometimes can), but forcing your opponent to spend two cards taking out your one usually puts you on the path to victory.

Speaking of Axe Flinger, am I the only one (still) excited about this 12-damage wombo-combo? 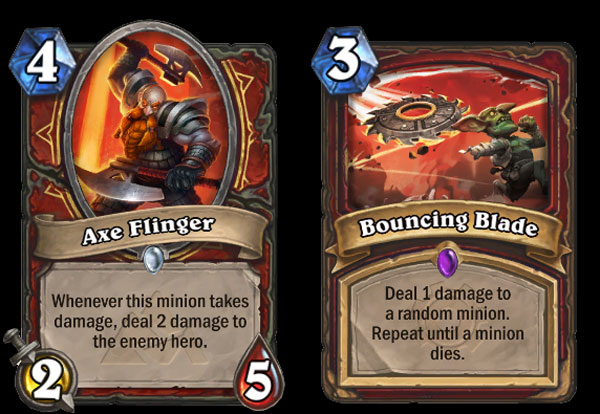 Play Axe Flinger. Next turn, attack for 2, then play Bouncing Blade, which should trigger Axe Flinger 5 times. This combo requires a lot – no enemy minions on turn 5 (or turn 4 with coin), no damage to Axe Flinger – but it would get massive style points from me. In fact, I’m incredibly tempted to try it myself, as I always thought Bouncing Blade was an underrated card considering it automatically kills any minion if it is alone on the board.

But, alas. The powergamer in me can’t help but ask which cards from the currently successful decks can be cut to make room for the fun ones, and if I’m not running a net deck myself, then how do I expect to win against those that are packing tournament-worthy deck-lists? Metas naturally ebb and flow – witness the meteoric rise of Demonlock and Oil Rogue – but the end result is efficient, predictable wins. In this regard, Hearthstone is exactly like Magic: the Gathering, and why I am sometimes loathe to boot up the game even to do dailies. Arena bypassed the blues for a while, but the introduction of the GvG expansion feels like it diluted the card base too much with crappy commons.

Still, I have been surprised by Hearthstone and the meta-bending deck wizards on more than one occasion. Here’s hoping I eventually find a deck or archetype to call home.

¹ Face Hunter is an aggressive Hunter deck which basically ignores everything the opponent does (with a few exceptions) and simply attacks face every turn. It is depressingly effective.