How ’bout that character generator, eh?

I remember the hubbub from back before the US release, where the character generator was a sort of standalone piece of software. It is still quite impressive, all this time later, even if most of the options end up turning your character into nightmare fuel more often than not. Still, for those that care about proper placement of their character’s dimples, I am sure that this sort of refinement is welcome.

What the character generator did not prepare me for is the rest of the game looking… washed out?

Ironically, it looks fine in screenshots.

To be clear, the game does not look bad. There is just a weird sort of dissonance between having an avatar constructed in incredibly minute detail… traversing a landscape with shrubbery that has a lesser polygon count than their eyebrows. The two simply feel out of place right away. As I was running around, all I could think about is whether or not Guild Wars 2 looked better.

Combat has been one-shot city thus far, and I think I’m technically level 17 at this point. It is certainly an interesting Action combat system, as it plays more like, well, Action RPGs. Hold Left-Click to perform a series of attacks, Right-Click starts another, LMB + RMB is something else, W + F is another attack, etc, etc etc. Technically there is also a hotbar you can utilize, but the in-game prompts warn you that it costs more resources (MP) to perform when not manually keying in the combo. Given that nothing has survived more than two hits of “hold down LMB,” I have not yet seen whether that’s relevant.

In fairness, the class I chose was Dark Knight. Which was selected based on the little video that play of the various classes and my research into what was Flavor of the Month. So maybe the class is just OP. Wizard/Witch were #1 and #2 in the FOTM ranking, but the experience of FFXIV’s abysmal Arcanist experience has soured ranged classes in new (to me) MMOs. Despite that, it was actually the Ranger that piqued my interest the most originally. Perhaps I’ll check that out later. 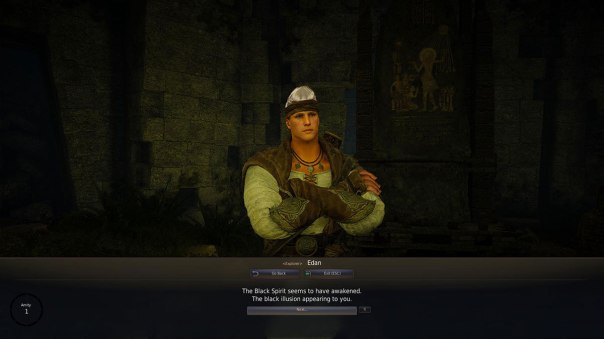 One factor that is going to limit my playtime right away is the garbage localization and questing. Quests are quests, but Black Desert has discovered a way to make them even less interesting. For most NPCs, you have to click on a Quest tab in a menu to bring up their quest, then they have two poorly-translated lines per screen to convey the information, and while they are “talking” they spout off their idle dialog that has nothing to do with the words on the screen. I suppose I shouldn’t expect much more from a game with an “auto-run to quest objective” feature built-in, but it’s a bit disappointing nonetheless.

I have not spent much time with the remaining game systems, including Node management and leaving the game running overnight/during work so you can AFK gain millions of silver for reasons. From what I understand, this absurd economy is mainly based around the principle that you’ll be throwing tens of millions of silver away in the gamble that is upgrading endgame gear. As in, to upgrade a 20 million silver sword to the next level, you have smash it together with another 20 million silver sword. Success means you get an upgraded 100 million silver sword. Failure means you get a silver sword one enchantment level less; not only have you lost the 20 million silver item, but you’ll have to buy more swords to smash together just to get back to where you were originally. Accessory enchanting works the same way, except that on a failure you lose both items.

Under that sort of insane rubric, being able to make millions while AFK fishing is OK.

…wait, no it isn’t. It’s still fucking nonsense, but whatever.

I had bought FFXIV ages ago for $15 in some sale or another, and had ostensibly been waiting for a good time for me and a friend to jump in together. The GTA 5 brouhaha, however, gave me an impetus to clear hard drive space and I didn’t want to redownload FFXIV again. So I channeled my inner Shia LaBeouf and just did it.

The first thing I encountered (after the lovely character generation screen) was the inability to create a character on Hyperion. Apparently when there are a lot of people logged onto a given server, Square Enix just shuts down character generation for a while. There are websites to keep track of this sort of thing, but they are only updated every couple of hours. In digging around, it appears this issue is related to the fact that FFXIV does not boot you for being AFK. Like ever, apparently. Leave the game running for 10 hours while AFK? You keep your spot. Game has been out for three years, right? Don’t know if this is a Japanese thing or what.

[Fake edit:] Apparently they finally added an auto-AFK logout in the recent expansion.

Characters with fully-rendered panties seen through basic armor, though? Definitely a Japanese thing. And technically Korean too, but who’s counting.

I ended up creating two four characters, as given how every character can be every class, the most important decision you can make is deciding on a look. And, bizarrely, this made character creation almost more difficult for me. If you don’t like playing a Druid in WoW, create a new toon. If you don’t like playing a cat-person in FFXIV though… good luck, as you’d need to do everything all over again.

I’m assuming there is a way to pay money to change it.

In any case, I stuck with human, because as nice as the Miqo’te look, I’m not terribly convinced that the tails won’t look goofy in endgame gear. Or any gear, really. Still kinda gun-shy with tails after sticking with my namesake draenei in WoW for nearly a decade and basically having 100% of all cloaks look dumb. Plus, apparently the Miqo’te are the spiritual Blood Elf equivalent in FFXIV, so there’s that. I almost stuck with Lalafell for the lol’s, but it was actually the running animation that nixed it for me. Playing a gigantic Roegadyn healer briefly crossed my mind as amusing, but my human (or “Hyur”) was already an Arcanist, and that seemed silly.

I don’t know if you’ve been following the new ground the developers of Rust have been breaking, but it’s both interesting and hilarious. The short version is that instead of customizing your character, all of your character’s physical attributes are randomly assigned and permanently tied to your Steam ID. This includes race, penis size, and now gender.

As you might imagine, some corners of the internet are melting down.

There are multiple layers of this design which are fascinating to me. The first is the sheer amount of free PR this generates. I mean, when was the last time you actually heard news about Rust that wasn’t about the size, color, and/or existence of the male sexual organ? Last thing I remember reading was from what feels like years ago, when Rust removed zombies… and people were crafting C4 to break into peoples’ shacks? It’s still a crafting survival game, right? I wouldn’t know.

Philosophically, the intended inability to choose your avatar’s features is also interesting. The money quote from the devs is this one:

Some of the criticism is coming from people who don’t want to feel restricted in their character creation, or people who want their avatar to look like them (for RP purposes or otherwise). But in a sense… is this any different from, say, Witcher 3 or any other game with fixed player assets? As the dev mentioned, you never actually had a choice at character creation, so nothing is being taken away. Is it about historical gametype precedent? Or about the fact that the devs could have added customization options but have clearly decided not to?

In any case, I like the cut of this dev team’s jib. They are doing bold things that could go horribly wrong, which is the heart of soul of R&D. Plus, listen to this bit:

“We wanted to lock people to an identity so they could be possibly recognized for their misdeeds, just from their avatar,” he explained. “The idea being that eventually we’d take away player names, and emergent stuff could happen like mistaking someone for a friend, impersonations, etc.”

That sort of “reputation” is asinine in a multi-server scenario IMO, but good for them for going for it. And removing character names altogether? That’s a pretty brilliant social experiment.

I’m not invested in the outcome of Rust, but damned if I don’t feel a tiny bit compelled to see what kind of character gets rolled for me. Not going to lie: if I end up getting stuck as generic white dude #476, I’ll be pretty disappointed.

I take a lot of screenshots when playing games, and most are deleted. Of the ones that survive, a few end up being Photoshopped and added into posts. The remainder? Consigned to Photo Limbo. Until now that I need some filler while on vacation… 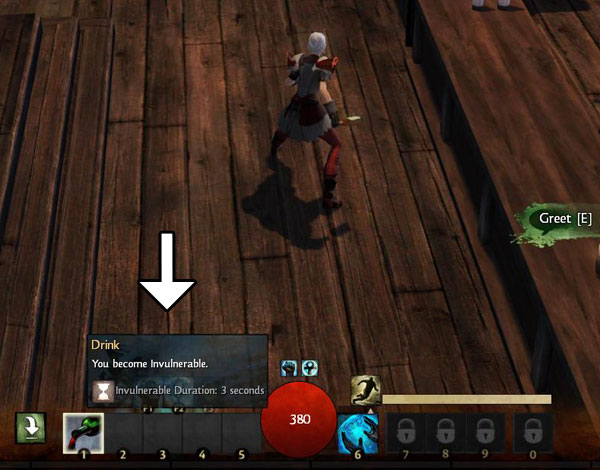 Better reserve XxArthasDKlolxX while you can.

Speaking of names, “Azuriel” and about 15 semi-random variations were taken when I was playing the beta. As you can see here, the secret is that GW2 allows spaces. While other games have done this before (including GW1, I believe), let me reiterate how awesome that is. Clearly it can be abused, but it’s nice to be able to actually take the name you want by simply adding a last name to your character.

This is why I don’t make male characters.