I saved almost $400 this Black Friday! By… not buying anything, thanks to bots.

Truth be told, it might not actually be due to bots, but I have my doubts. Specifically, both the GameStop $199 PS4 + $50 voucher deal and the Kohls $199 PS4 + $60 voucher deal were sold out by the time I got up on Thanksgiving morning. I am sure there are still technically $199 PS4s floating around (Edit: Looks like a no), but considering those vouchers were almost the equivalent of all three of the PS4 games that I would have played, I’d rather take my wallet and go stay home.

Then again, maybe it was all normal people pulling annoying arbitrage bullshit like WoW AH goblins. Out of curiosity, I went to eBay to look at the current listings of things. 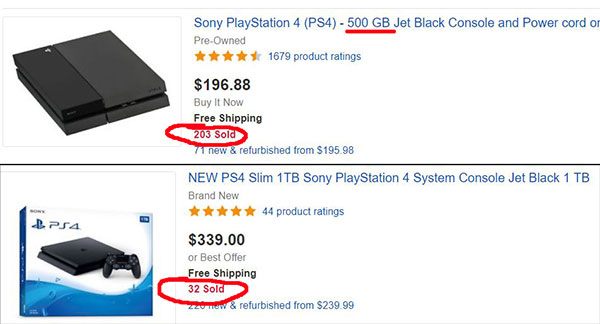 WHO ARE THESE PEOPLE?! Both the clueless idiots still capable of navigating eBay but un-savvy enough to not look for deals with a simple Google search, and the swindlers preying on them. This is all a prime counter-example to show whenever someone tries to win an economics argument with the assumption of rational consumers. We are all irrational as hell.

Alas. Perhaps this entire episode is doing me a favor by not enabling me to buy three $20 PS4 games at technically $86 apiece. Even if I had gotten the voucher, they still would have been the equivalent of $66. In almost all other cases, I would prefer to play games on my PC, which already has a Blu-Ray player. Now, I may have eked out a bit more value from the free games from PS+ each month, but considering that my PS3 has gotten zero use in the last year, that’s still debatable.

I also passed on the Honor 6X for now. It actually went on a flash sale for $145, but in the process of looking at it closer, I realized that I bought my Honor 5X back in June 2016. Seems a bit silly to buy a new phone 1.5 years later when my current one is still functioning at 100%. People spend way more money on new iPhones every year, but those people are irrational.

What I did end up picking up were Far Cry 4 and No Man’s Sky, for about $13 and $20 after discounts, respectfully. I’m still on the fence about Destiny 2 at the moment, but I might take the plunge with some of my $90 in Blizzard credit from having sold WoW gold a year ago; I should still have enough for the next WoW expansion since Destiny 2 is on sale. That should be enough, right?

Comments Off on Full Circle

I just bought a Playstation Vita and I don’t know why.

…okay, maybe I know why: 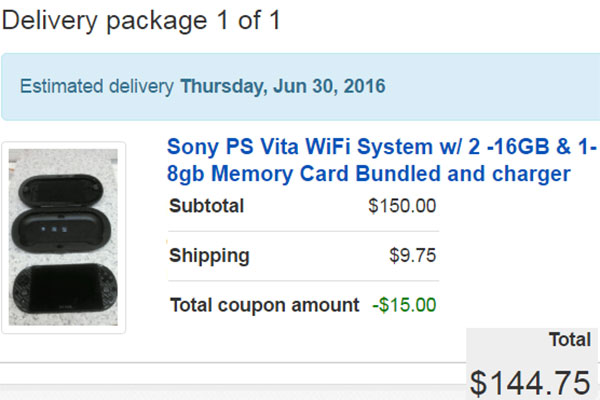 A bargain at twi… pretty much that price. Or less.

The amount of both hem and especially haw I was engaging in was truly ridiculous. As you all know, I dislike decisions generally, much less ones with deadlines. In this case, it was the $15 that eBay was giving everyone for making a purchase over $75, as long as it done by 8pm EST on Friday. On top of that, I am heading on vacation the week of the 4th, so it’s entirely possible that the Vita doesn’t make it to me before I leave.

Want to know what pushed me over that final edge? It was this:

Of course, the continued existence of my PSP triggered some intense buyer’s remorse. Simply put, I don’t play much else than my PC games these days. Or since college, really. It took games like The Last of Us and Journey to convince me to get on the PS3 bandwagon, and I have yet to finish anything else on the system. Red Dead Redemption? Years worth of PS+ freebies? Nope. Similarly, not much progress has been made on the PSP front since buying it just about two years ago. Booted up Legend of Dragoon and some SNES classics for fun, and that was about it.

The really embarrassing thing about this purchase is that I don’t even know what games I have for it. Sony’s website is about one of the most egregiously useless pieces of website garbage I have seen in quite some time. This isn’t like Steam or GoG or even Origin where you can see a nice listing of all your games. Nope, it’s just pages and pages of unsortable nonsense. I have apparently accumulated 269 individual titles (free DLC counts as a title) from over three years of PS+, and the only way for me to actually tell which are Vita-playable will be to Ctrl-F and create a spreadsheet.

So, in essence, I had to have bought the Vita to figure out what games I own. Pelosi would be proud.

Having said all that, there are a few factors that make this less of an insane impulse buy. The first is that my PSP has a weirdly distorted screen thing going on, which dampened my enthusiasm after the initial vacation impetus for its purchase faded away. The second is that my living arrangements will be altering a bit in the coming months, which may or may not impact my PC usage. Finally, it was such a pain in the ass to actually play games on the PSP, and so I’m hoping that’s less of an issue this time around with the Vita.

In any case, I suppose we will see how this… plays out.

This Is Why We Can’t Have Good Things

A few hours after Saturday’s post, I decided: “Yep, that PS3 bundle is the way to go.” Part of the ordering process is choosing the bonus game, which I did. “Part of this bundle is out of stock.” Alright, maybe everyone is picking LittleBigPlanet 2? I tried another game, and got the same error. Finally, I refreshed the page and saw this: 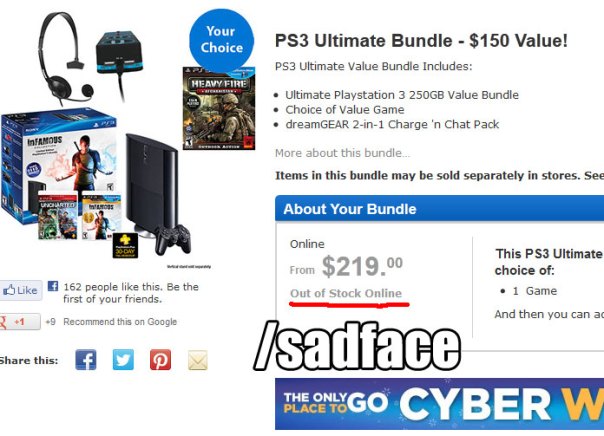 Given the fact that I would have been getting five games, all of which I had a passing interest in, along with the 250gb console itself for $219, I started kicking myself for not jumping all over this thing. Why didn’t I order as soon as I saw it on Friday?

Bah. Let me check some other places to see if they offer similar price ranges…

You goddamn sons of bitches.

In the heat of my rage, I did end up laughing a bit over the fact that I was partly mad that I hadn’t thought to do this exact thing myself. These assholes aren’t even including the bonus game, which means they basically got paid $65 to take a free videogame.

But, seriously, this sort of shit is why we cannot have good things. Capitalism and free markets working as intended, sure, whatever. But can you sit there and tell me that this sort of arbitrage is anything more than nihilistic? There is zero difference in “markets” between Walmart.com and eBay, especially when the latter is being sold by a small-time retailer. I am fine with arbitrage conceptually because while the profit is essentially risk-free, it can be argued that value is actually being generated by the arbitrageurs by virtue of them moving product between markets. For example, I am fine with some local store basically buying shit online and selling it in their store at a markup, because hey, maybe I don’t want to wait for it to get mailed. Or maybe I’m not internet savvy. And so on¹.

These guys though? Fuck those guys. Stores are posting deals to encourage more shoppers to show up, and what they get instead are opportunistic leeches extracting other peoples’ consumer surplus while adding nothing. These are concert ticket scalpers buying thousands of tickets, artificially creating the scarcity they prey upon to the detriment of all parties.

And what really sucks for me personally? I am not going to be able to look at any sort of lesser PS3 deal without a jaundiced eye. Future deals will be contrasted with a $219 possibility and likely be found wanting. Just like with the Steam Autumn Sale going on right now, if I somehow miss a 75% deal during its window, I am not ever buying that game until it is back on a similar discount. It may not be entirely logical, but it is the way things work for me.

Moral of the story: Jump on these sort of deals immediately. Worst case scenario: eBay.

[Fake Edit] As I pulled into the Best Buy parking lot on Sunday to pick up my $180 32″ TV and $20 MoP expansion (uh oh), I noticed there was a Walmart right next door. Went in to get some groceries, walked out with the $199 (!) aforementioned Infamous/Uncharted PS3 bundle (cheaper because no bonus game). My “normal” Walmart didn’t have any, but this one had at least four. I was sorely tempted to go “I’ll take all of them,” but internet bravado rarely transfers into real life. Plus, I was already feeling worried I was going to get ‘jacked on my way to the car by carrying around a 32″ TV and PS3, let alone several.

¹ It did occur to me that I did a lot of this sort of thing in MMO AHs, i.e. “flipping.” However, I would argue that I was still providing a service insofar that the original seller was desiring a quick liquidation and nothing else. Or maybe it is the same thing in the abstract. Then again, the person who ends up buying my flipped good never knows how much I bought it for, which is the source of a lot of my ire right now.