Minecraft has sold over 100 million copies. In 2016, the average rate of new sales was 53,000 per day. That’s… pretty big. Here is part of the infographic Mojang posted: 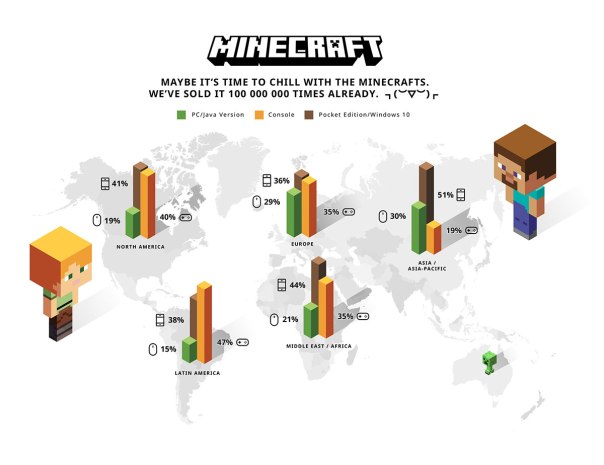 The above infographic really surprised me though, for several reasons. As I pointed out in January of last year, the Minecraft stats we had circa June 2014 were the following:

The reason I bring this up is due to a recent post by SynCaine. His thesis is:

The bigger point here though, as it relates to MMOs, is that this is a very important date point related to the “Everyone who wanted to play WoW already has it” talking point and how it relates to the failures of the game from WotLK and beyond. Minecraft has a much larger user base than WoW, yet it’s still attracting a horde of new players daily, so why do some people think WoW is a special snowflake and had/has tapped out the market?

In other words, “how can market saturation exist if Minecraft is still doing so well?”

Wilhelm deconstructs the argument pretty thoroughly already, but I wanted to spend a moment, again, to remind people about big numbers. Specifically, the extremely likely chance that WoW is selling more copies per day than Minecraft is on PC. Yes, even now, in the nadir of Warlords.

The two questions you need to ask yourself are 1) what is WoW’s current population, and 2) what is its churn rate (i.e. percent of players that cycle out per month). Historically, the churn rate of WoW was 5%. Is it higher now? Probably. So, to throw out two numbers, let’s assume that WoW is holding steady at 5.5 million subs at a 10% churn rate. That means WoW needs to sell 18,333 new subscriptions a day, just to keep pace.

WoW is losing subscribers these days, of course. Since the numbers are no longer being reported, we may never know how many. But let’s do some sanity checks. The last reported sub number was 5.5 million in September 2015. As already noted, maintaining that number would require 18,333 new subs a day. But WoW probably isn’t maintaining anything – it’s losing customers. Rather than be arbitrary, let’s assume it’s “only” getting something like, oh, 13,120/day.

Do you believe WoW is currently at ~4.1 million subs or less? If not, hey, it’s still selling more boxes daily than Minecraft on PC.

In the comments to his post, SynCaine pointed out that since WoW is in decline, we can’t actually say that 100% of the churn are new players coming in. Er… okay. That’s not how churn (or reality) works, but let’s roll with that. What is the population at then? The same 4 million-some? Zero new players and 1.4 million vets burning out in the last 9 months? That’s an average of 156,390 per month, which equals a churn rate between 2.8-3.8%. Meaning this dead period of Warlords retains players better than vanilla or TBC ever did.

Granted, the reality is probably somewhere inbetween there. Still, big numbers are big.

If you have forgotten, Scrolls is that one card game from Mojang that no one ever played. And after July 2016, no one else ever will.

I actually had a Beta review up of Scrolls nearly two years ago, and that more or less marked the last time I spent any serious amount of time with it. I did pick it up again for a hot minute last year (I think), but the structural problems I already talked about were still present, so I stopped again. Probably because of Hearthstone. But, the CCG genre is not a genre one can go in half-assed anyway- it is strictly full-ass or bust.

While Scrolls getting an expiration date is not even remotely similar of an impact as an MMO shutting down, it is example #1765783 of the dangers of Games as Services. This is a game that I paid $20 for (two years ago, admittedly) that I will not be allowed to play in another year. Do you know what I played last month? Vampire: the Masquerade – Bloodlines, an RPG that came out in 2004. And while it certainly costs money to keep an MMO server running each month, Scrolls had a perfectly fine single-player experience against the AI. Hell, I’m not even sure what the cost of running Scrolls matchmaking software would even be. Surely not that much?

Alas, it is not meant to be. While we can question whether it was Microsoft swinging the ax or normal market forces, the fact remains that the ax was always there. A veritable Sword of Damocles hanging over every game-turned-service, not threatening mere removal, but extinction. Will there even be a museum where these games could be played in the future? Or will these orphaned blog posts be all that exists, a Google search result that becomes less relevant with each passing year?

Nothing is permanent. But clearly some things are more impermanent than others.

I tried out Scrolls the other day, mainly due to this video. My initial impression is… mixed. Which is not good for a game that requires $20 to buy-in into a beta state. 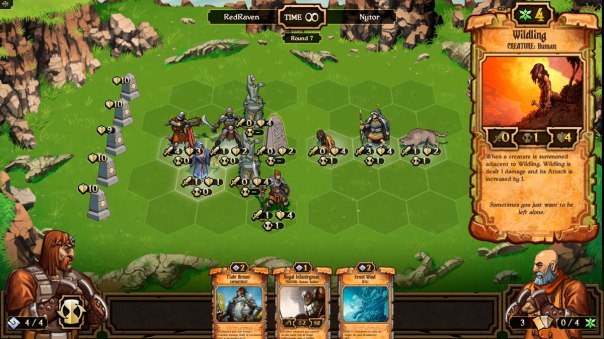 The flesh is willing, but the mind is weak.

For those who may have forgotten, Scrolls is the TCG follow-up project to Mojang’s genre-defining Minecraft. It is essentially Magic-lite with a few extra tactical considerations. Each player has five 10-HP totems at the end of five lanes, and take turns placing creatures or structures or casting spells/enchantments in an effort to reduce three of those five totems down to zero health. Creatures will attack down their lanes when their timer reaches zero, damage is persistent, and creatures can also be moved usually one “hex” each turn.

What I enjoy about Scrolls so far is its rather ingenious, nested card mechanics. At the start of the match, you draw five cards and thereafter draw one card per turn. Each turn, you have the opportunity to discard a card to increase your resources by 1 permanently (e.g. turning it into a MtG “land” essentially) or discarding a card to draw two new cards. As you can only have three copies of a given card in your deck, this immediately makes the early game exceedingly complex on a strategic level. Should you turn that high-cost card into resources now, or save it for later? Now that you’re at 5 resources, should you discard in order to draw two new cards or continue pumping up resources to allow you more options each turn? I doubt that Scrolls is the first card game to feature a system like this, but I am finding it extremely… delicious. 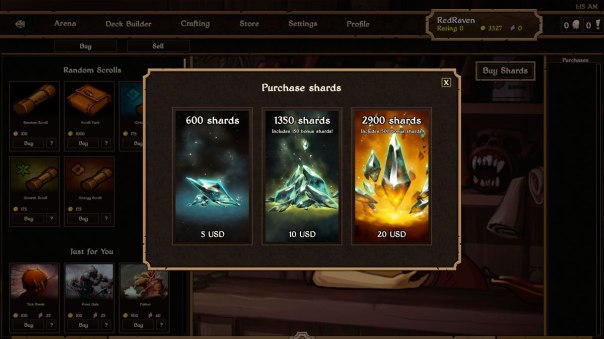 Really? That big pile of Minecraft money not good enough for you?

Now that I think about it, my mixed reaction basically comes down to the Store aspect. After you purchase the game, you unlock one of the three Starter decks to play with. Thereafter, you are stuck purchasing new cards in awkward increments using in-game gold earned from winning matches (either against AI or people). I made the unfortunate mistake of purchasing the Order deck and realizing that I don’t actually like its gameplay – a high emphasis on maneuverability and defense and so on. I am getting around ~300g for winning Trial matches (e.g. scenarios), but the other Starter decks are 6500g total. I started with 2000g, but foolishly purchased the 10-card booster packs at 1000g apiece.

So, essentially, I am stuck with a deck I don’t particularly enjoy playing while having to grind out dozens of games with no hope of actually seeing any new cards for that entire duration. Technically, I can also purchase things in the store for Shards, which is the RMT currency. However, the thought of spending more money on top of the $20 I already paid to play the game in the first place is repulsive. Scrolls is not a F2P game. Finding myself confronted with a payslope after the initial paywall is incredibly frustrating, especially with there being no way to undo the designer trap (having to choose a Starter deck with zero information) I fell into to begin with. This is a TCG, sure, but if your Starter deck isn’t fun to play, most rational people won’t be playing for long.

I am going to continue playing in the hopes that things improve, but at the moment I couldn’t really recommend Scrolls to anyone just yet.

…hey, Scrolls is apparently still a thing. You know, the card game from Mojang, aka the company that made Minecraft, that was sued by Bethesda due to “Scrolls” being too close to that part of the name no one uses when talking about Bethesda games. Although I suppose with The Elder Scrolls Online coming out, that could conceivably change.

The open beta for Scrolls starts June 3rd. Poking around on the site reveals that the game proper will cost $20, and while there is a RMT currency (“Shards”), according to Mojang (emphasis added):

In other words, it does not appear as though cash shop currency is required to purchase the equivalent of booster packs. In fact, aside from the cards themselves, I’m starting to wonder how like a TCG this game is even supposed to be. Scrolls isn’t being marketed as a F2P game for starters, so it’s possible that its constructed in a fashion that allows reasonable card progression just from play, e.g. it’s a normal damn game that doesn’t require goddamn graphing calculators to plot entertainment per dollar ratios. We’ll see how that all shakes out.

It is kind of amusing, how often things release is apparently independent cycles. Deep Impact came out just months before Armageddon. Dante’s Peak came out two months before Volcano. And now we have Hex, Scrolls, and Hearthstone all either releasing or hitting Open Beta in 2013. I would count Cardhunter among them, but the stingy bastards have yet to give me a Beta invite.