I didn’t think it was possible, but I like Final Fantasy 7 Remake even more.

One aspect that I didn’t like initially has really grown on me: uninterrupted dialog. Basically, there are no RPG-esques pauses whenever someone is talking. Conversations just flow with zero button inputs. It was initially kind of frustrating, because some of the banter is hilarious and it goes by too quick for me to take a screenshot (I always have subtitles up in games precisely for screenshot purposes).

But do you know what it all reminds me of? Mass Effect.

Over ten (!?) years ago now, I was writing about how the winks in Mass Effect were blowing my mind. There is a lot more than winks going on in FF7R, but that’s not really the point. The point is that these are genuinely interesting characters with personalities and mannerisms. They wink, nod, pose, strut, and otherwise behave in consistent ways. Some of those mannerisms are very anime-ish, but hey, Japan. At least these land miles better than in FF14.

Anyway, I just got to the point where I party up with Aerith and I’ve been smiling the whole goddamn time. I’ve always historically been Team Tifa, even before Disc 1, but Aerith is the biggest dork in the Remake and I love it. Just the little things like Cloud saying “The wererats pray on the weak” and Aerith replying “Well, you better be careful then.” Typing this out seems so dumb but there’s just this whole vibe going on in the game, and I’m feeling it.

Oh, and there’s this moment when Cloud and Aerith reach a pipe and have to slide down to get to the next area. Aerith goes first… and says “Wheee!” with her hands raised in the air as she goes down.

Guys. Guys. Again, feel super-dumb typing it out. But when was the last time you played a game where you were able to vicariously feel the joy and care of the designers through the screen? Whoever scripted that moment loved their job. It didn’t have to exist. It was over in literally two seconds – I couldn’t even hit the screenshot key fast enough – and it has no bearing on anything other than to flavor the experience and convey that which is Aerith.

It made me smile. When was the last time a game did that for you?

In closing, let me reiterate the disclaimer that the original Final Fantasy 7 has been in my top 5 game list for 25 (!?!) years. So FF7R is basically intravenous nostalgia from the word GO. Will you appreciate the “personalities and mannerisms” of these characters in the same way I do? Probably not. In a vacuum, they might just be cliché.

Nevertheless, these devs have taken a formative experience of my childhood and brought it to life in a way that has exceeded all my wildest expectations. A breath I never knew I was holding has been released as a cathartic sigh, blowing away my whole jaded gamer schtick. For the time being, at least.

So there it is. Hopefully the rest of the game holds up, but it doesn’t even matter. I’m happy right now.

Comments Off on Second Impressions: FF7R

I May Be Ruined

Everything is going swimmingly, although I am beginning to suspect (all) other games have been ruined for me in two very specific ways.

First, I am not sure I can go back to text boxes in RPGs anymore. It is not just about BioWare’s penchant for fully-voiced stories, it is about the equally gripping body language. Everyone has heard about the whole “93% of communication is nonverbal,” right? We are now at a point in game design when at least one company is capable of delivering on that 93% and I do not know if I can go back.

It isn’t just about the smiles, the winks, the nods, or the scare quotes by characters with only three fingers either. It is about the more subtle touches that keep my eyeballs glued to the story exposition. For example: 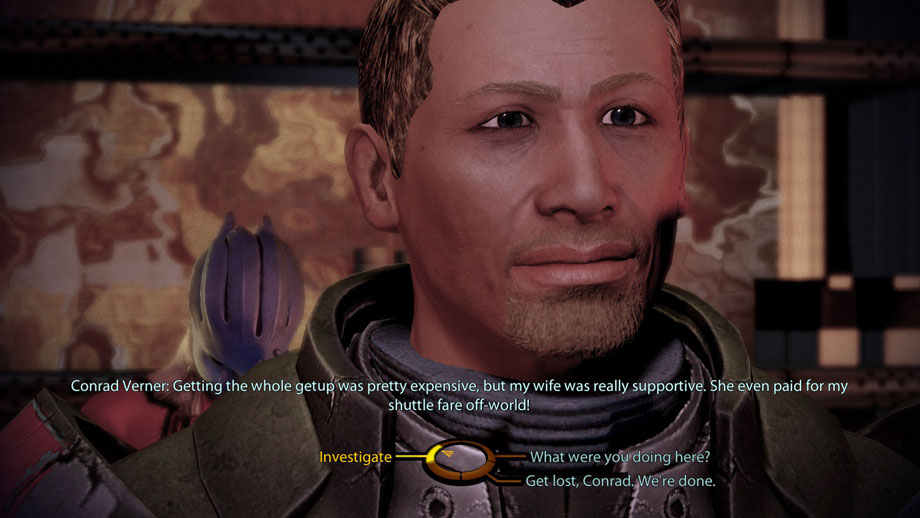 I should have shot him in the foot when I had the chance.

The asari bartender in the background facepalms when Conrad speaks the part about his wife buying the ticket. I actually had some difficulty taking that screenshot because the time between the background facepalm and the camera switching back to Shepard is less than a second – I had to redo that part of the conversation twice to get the shot.

Think about that for a moment. Someone actually went through the trouble of programming a facepalm into a (presumably) throwaway, non-required dialog option, with less than a second of screentime. Understated is an… er, understatement.

Going back to strict text and using my imagination to fill in the blanks? I am not quite sure it will feel the same knowing that the blanks are literal blanks; unless the developers clearly make up for it in other areas of the game, I suspect I will recognize the gaps as deficiencies rather than “imagination opportunities.”

The second way I have been ruined actually came via The Witcher, and is very clearly manifesting itself in Mass Effect 2. Specifically, I now believe I can and should be able to romance anyone and everyone, simultaneously. 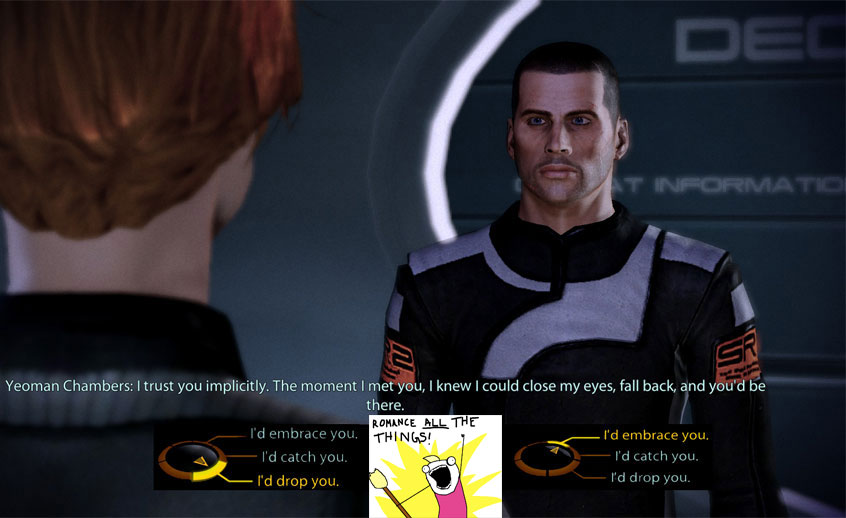 Romance All the Things!

I first noticed this tendency when I was flirting with the ship psychiatrist – whom should really know better – and became nervous that things might get out of hand before the entire playing field became available, so to speak. This was not a problem in The Witcher; in fact, you typically only had a single opportunity for “romance” at any given time, so it was a series of all or nothing encounters.

To be honest, this probably has more to do with my methodical nature in gaming than anything else. The baseline assumption I operate on is that I will only ever play a game once – I am looking to maximize my fun, not fill time, and 2nd playthroughs almost always lose out to the dozens of other games available. Ironically, this leads to counter-intuitive game behavior wherein I suck the very marrow out of a game’s bones, completing every sidequest and bonus mission long after such things have ceased being fun and/or make sense to do. Exploring every planet in every system cluster in Mass Effect 1, running Miscellaneous quests in Skyrim as a level 54 character with 100k+ gold, and so on.

As you might suspect, mutually exclusive romance options present a certain difficulty to me.

I do have a residual desire to play ME1&2 again as FemShep, which I would have done originally if not for the availability of romance options at all (that’s another post). The ideal romance scenario would be the “Deus Ex ending” one, wherein you could save right before the critical choice and I could reload to see each outcome. I am getting the impression that this is not how things will shake out.

Youtube exists, but it is just not the same.

Having completed Torchlight, I decided to move onward to Mass Effect. Why not Skyrim, which is literally burning a hole through my Steam library? As Liam O’Brian might say, the status of my preparations is in doubt. I prefer one meaty title with a helping of indie garnish along the side – with something like Skyrim, I’m getting the impression that I’ll still be eating turkey sandwiches for months later.

About 5 hours into Mass Effect, all I can say is holy shit.

One of the most groundbreaking things occurred in the city after the first “dungeon.” In talking with a receptionist to the Consort, she winked at me. 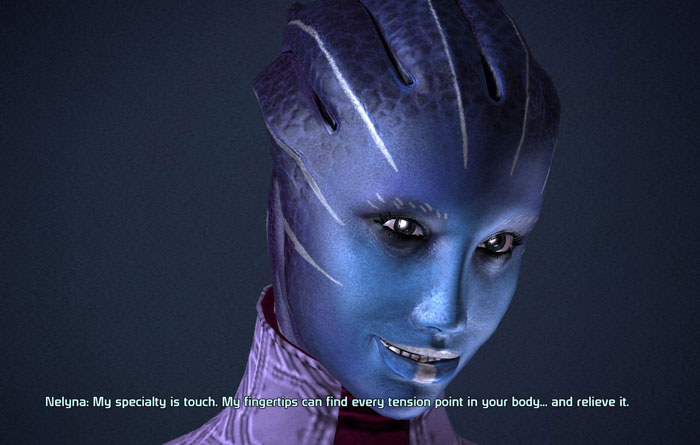 She also said that, but nevermind.

My incredulity may sound facetious, but I am actually very, very impressed.

See, I have been thinking about the problems with storytelling in videogames for quite some time. How is one supposed to convey subtle nuance in a game? In purely written works, it is somewhat easy to evoke the emotion you want to get across, provided you massage the language a bit. For example, consider the following:

Lord Vetinari lifted an eyebrow with the care of one who, having found a piece of caterpillar in his salad, raises the rest of the lettuce.

How could someone ever translate that in game form? Nevermind Vetinari’s specific sentiment here, think generally: there is an entire genus of expression that the format is preventing designers from expressing.

Games have some pretty unique qualities that cannot be replicated by other mediums too – Far Cry 2’s plot wouldn’t work without player interaction – but many times it feels as though designers simply give up. Game narratives are written in the language of action because of these restrictions on expression. Why are we always killing 10 [%local_wildlife]? Or killing everything, period? Well, how else are you supposed to convey conflict when reduced to crude avatars with clubs? Even though all games have access to written dialog, at some level we do expect everything to be translated into the language of action. And until the last few years, it was functionally impossible to express more than a rudimentary emotional gesture anyway.

There are pitfalls too, of course. Blink during the wink, and you’ll have missed it. Or, hell, focus on the subtitles and miss it too. It is also arguable about whether games should try and be more like the other mediums, instead of focusing on its own unique strengths.

To that last charge, I say “Watch that scene in FF7 again.” Pay close attention at 1:19. More than the murder itself, it was Sephiroth’s smirk that drove home how irredeemably evil the man was. Without the CG movie we would never have saw it; calling attention to smirk in-game via text would have ruined its subtle gravity. While story can certainly be a crutch to prop up forgettable gameplay, story can also be a pole that vaults a game into the classics.

So, Mass Effect, you have my full attention. I just hope you do a little more winking a little less of this: